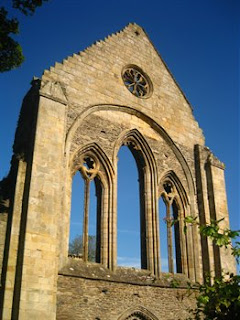 Guto’r Glyn (Guto of the Glyn) is widely regarded as being one of the foremost poets of Wales’s golden age of poetry – the period following the end of Owain Glyndwr’s rebellion in the first decades of the 15th century until the Act of Union in 1536.

The life and times of the medieval poet will be examined in a one-day forum taking place tomorrow, entitled "Guto’r Glyn and Valle Crucis: A fifteenth-century poet in the Llangollen area". Hosted by the University of Wales' Centre for Advanced Welsh and Celtic Studies (CAWCS), the conference will be held at the Royal International Pavilion in Llangollen.

The university's Guto’r Glyn project has been operating since 2008, owing largely to a substantial grant awarded by the Arts and Humanities Research Council (AHRC), that has enabled a team of researchers at CAWCS, based in Aberystwyth, to conduct an extensive reappraisal of Guto’s prolific literary legacy.

The six papers given at the forum, which can be heard in English or Welsh, include "The Life of Guto’r Glyn," Barry J. Lewis; "Guto’r Glyn’s poetry to the families of Pengwern, Bryncunallt and Plasnewydd," by Ann Parry Owen and "The Architecture of Happiness in Late-medieval Wales," by Richard Suggett.

Guto'r Glyn was born around 1435 and became famous for his Welsh praise-poetry. Among his benefactors was Sir William Herbert of Raglan in Gwent, who sponsored Guto throughout much of his professional life. As a close friend to Sir William’s family, Guto would regularly recite poetry and sing at their home. When Sir William was killed at the Battle of Banbury in 1469, Guto – a staunch supporter of the Yorkist cause - sang his elegy at the funeral. Today, the written record of this poem now stands as a rich historical document tracing the trials and fortunes of Welsh politics during the War of the Roses.

King Edward IV was also another prominent figure to have commissioned Guto’s poems of praise. As well as having travelled extensively throughout the country winning the praise and patronage of noblemen and clergymen, Guto'r Glyn also served as an archer in the English army’s campaign in France during the latter part of the Hundred Years War.

Guto spent his last years as a lay guest at the Cistercian abbey of Valle Crucis, near Llangollen. Though blind and deaf, the poems he wrote during this time are among the most powerful poems of the Welsh language. At the end of the forum there will be an opportunity to visit the stiriking abbey itself, no doubt still a great source of inspiration for aspiring poets looking to follow in Guto’s footsteps.

As part of the Guto'r Glyn Project, the University of Wales will publish an online electronic edition of his works in 2012, which will include English translation of his poems and notes on key issues of interest. The website will also provide an insight to life in fifteenth-century Wales, using Guto’r Glyn’s poetry as a starting-point. A printed edition of his poetry and two volumes of scholarly articles will also be published.