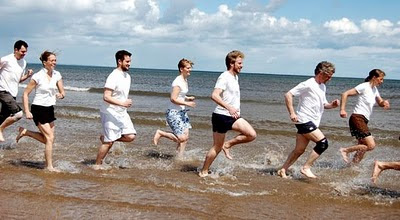 A group of medieval historians from the University of St Andrews are preparing to swap their gowns for shorts at the Edinburgh marathon on Sunday, May 23rd.

Running in aid of MS Scotland, in support of a former student who has multiple sclerosis, the group have almost raised their target of £2,000.

They said, "We chose to run for MS Scotland as Multiple Sclerosis affects one of our former students. We hope to raise money to fund further research into the condition. Multiple Sclerosis (MS) is the most common disabling neurological condition affecting young adults. Around 85,000 people in the UK have MS. In Scotland it is estimated that there are 10,500 people with MS – more people per capita than anywhere else in the world."

Currently, the group has raised £1,739.52 and have almost reached their goal.

To support them visit: www.justgiving.com/themediavalists