Medieval Night at Leicester this Saturday 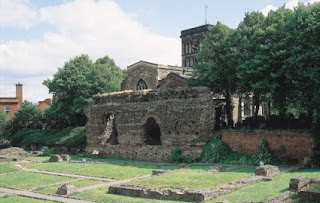 Leicester, England will be the site a night of activities about the Middle Ages at the Jewry Wall Museum this weekend.

The venue will host the event, involving historical talks, displays and medieval craft activities, on Saturday, May 15, from 6-9pm.

Visitors will be able to learn about medieval diets and cooking methods, as well as medicine and other aspects of daily life in the middle ages. There will also be a chance to try glass painting, drawing inspiration from medieval stained glass windows, and also to try on and handle replica historical clothes and items.

At 6pm and 7.30pm, guides will take visitors on a walk around the sites of medieval Leicester.
The museum and adjoining Roman bath house site will also be open throughout the evening for visitors to explore the illuminated ancient remains.

Admission, activities and tours are all free, and light refreshments will be available.

The Jewry Wall is the remaining wall of the public baths of Roman Leicester along with foundations of the baths. Nearly 2000 years old, the wall's name does not come from Leicester's Jewish community. Instead, it is thought most likely that the name bears some relation to the 24 jurats of Saxon Leicester, the senior members of the Corporation of Leicester, who were said to meet in the town churchyard just next to the baths and largely made out of Roman building rubble.

For further details of all events at Leicester's museums, visit www.leicester.gov.uk/museums