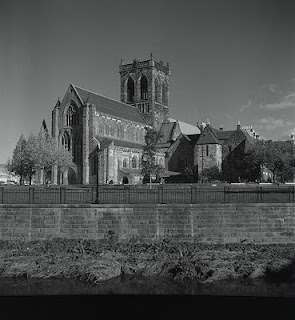 Scotland’s links to a once all-powerful religious order are celebrated as part of an eleven-hundred year-old anniversary.

A delegation from Cluny is visiting Scotland as part of a year-long commemoration to mark the anniversary of the founding of the Cluniac Order in Burgundy.

Scotland's Culture Minister Fiona Hyslop met the group as they visited Paisley Abbey, one of few remaining Scottish sites with links to the Order, one of the most influential in medieval Europe. She said: “I am delighted to support la Fédération des Sites Clunisiens in its commemorations and welcome them to Scotland.

“This is a wonderful opportunity to celebrate the historical link between our countries and the way it has shaped our communities.

“I am especially proud that the delegates will see at first hand the successful partnership working between communities, local authorities and Historic Scotland at Paisley Abbey, Crossraguel Abbey and Dundonald Castle.”

Cluny Abbey was founded in 909 or 910 by William the Pious and the Cluniac movement, which has links with France, Germany, Italy, Spain, Switzerland, Belgium, Portugal and the United Kingdom, was defined by its values – including the promotion of peace, the appreciation of beauty and caring for the socially deprived.

Scotland has two significant sites for the order: Paisley Abbey and Crossraguel Abbey, both of which will be visited by the delegation.

Paisley Abbey was founded in 1163 by Walter Fitzalan, High Steward of Scotland. Among its features of interest the Abbey houses the Barochan Cross, which is in Historic Scotland’s care.

This free standing sandstone cross probably dates from the 10th century and is one of only three surviving complete crosses from early medieval Strathclyde.

Crossraguel Abbey, near Maybole, was founded around 1250, originally as a daughter house of Paisley Abbey. Dundonald Castle is linked to the Cluniac movement through a connection to Walter Fitzalan.

This project will involve archaeologists and architectural historians from Scotland working alongside a team from France’s Ecole Nationale Supérieure d’Arts et Métiers.