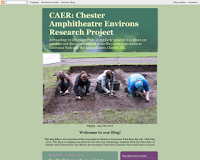 Archaeologists and students from the University of Chester are about to embark on a month-long excavation to unearth vital clues about the history of Chester's Grosvenor Park.

Throughout May students will work with Cheshire West and Chester's (CWAC) Historic Environment Team to excavate remains associated with the Civil War, Medieval and Roman periods in the city's park.

Simon Ward, senior archaeologist with Cheshire West and Chester Council's Historic Environment Team, has joined with the University for the fourth consecutive year to direct the excavations, which are a key training experience for second year Archaeology students.

This year's trench focuses on an area near the boundary with St John's Church and the proposed site of Cholmondley's Mansion. Excavations in this area last year showed that there are also potential Roman levels preserved here.

Dr Meggen Gondek, Programme Leader for Archaeology, said: "It is an exciting time to be an archaeologist in Chester with all the recent investigations and discoveries. Every find and archaeological feature adds another piece to the story of the city's rich heritage."

For the first time on this particular project the trainee and professional archaeologists will be keeping an online account of their finds in a blog, which goes live on May 4, so that interested parties can keep up to date with all the discoveries.

On Friday, May 21, and Saturday, May 22, the project will be opened up to members of the public who will be given tours of the site and the opportunity to quiz the staff and students. There will also be a chance to get involved in artefact handling and washing, as well as a ‘mini-dig' and colouring activities for children.