The remains of Red Earl's Hall, the oldest surviving structure in the Irish city of Galway, was officially opened yesterday as a visitor's attraction. The medieval hall, built in the late 12th or early 13th century, were uncovered and preserved as part of the recent extension of the City’s Custom House. The original plans for the Custom House extension were re-drawn by the Office of Public Works to allow the medieval hall to be put on permanent display to the public.

Speaking at the opening, Minister for the Environment, Heritage and Local Government, Mr John Gormley said that the preservation of the hall, the earliest surviving settlement structure in the City, would “greatly enhance Galway’s rich educational and cultural infrastructure”.

He added that the successful integration of the archaeological find with the new building “testifies to the reality that good planning and development can go hand in hand with the preservation of our built heritage”.

The new visitor attraction will be operated by Dúchas na Gaillimhe (the Galway Civic Trust). The Minister said that the Trust’s “valuable work on many projects around the city is well known and much appreciated”. As a precursor to all the buildings around it, he said that the Red Earl’s Hall was “a tangible link to the earliest days of the City that would stimulate the imagination of every visitor”. 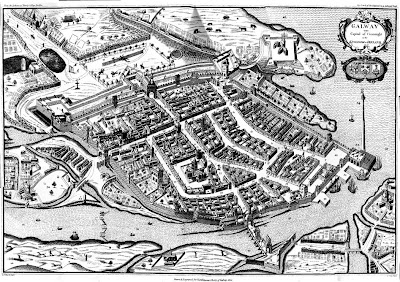 The hall was built by Richard de Burgh, the Red Earl of Ulster and Lord of Connacht, who served as Justiciar and Regent of England in the early thirteenth century. The Red Earl inherited a castle in Galway and carried on the construction of the town walls around the settlement that had been started by his father. He died in 1326 in Athassel, County Tipperary.

The medieval hall was built in the late thirteenth or early fourteenth century, but by the end of the Middle Ages it had fallen out of use and it appears roofless on the 1651 Pictorial Map of Galway. In the eighteenth century, a courthouse was built on the site and a Custom House, the predecessor of the current building, was constructed in the nineteenth century.

The Custom House in Galway was being renovated in 1997 when the remains of the medieval hall were found underneath. The new office was designed so the ruins are preserved and visible to the public.

Click here to see an image of the remains from Flikr

Click here to go to our section on Medieval Ireland

Source: Ministry of the Environment, Heritage and Local Government