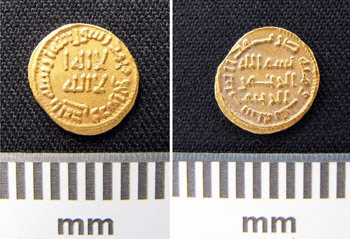 Egypt's Cultural Minister, Farouk Hosni, announced that a gold Umayyad coin was unearthed last Thursday during an excavation at Deir Yehnes el-Koseir (Monastery of St. John the Little), an area in Wadi el-Natrun. The excavation is a joint venture between Yale University in the USA and the Supreme Council of Antiquities (SCA).

The coin can be dated to the year 103 of Higra (721 AD) during the reign of the Umayyad Caliph, Yazid Ibn Abdel Malek Ibn Marawan.