A University of Hertfordshire historian has received a European Union grant to conduct the first ever study into spinning before the Industrial Revolution. The grant for €823,150 has been awarded by the European Research Council so that Professor John Styles can undertake a five-year research project into Spinning in the Era of the Spinning Wheel, 1400-1800, which begins on 1 June 2010. 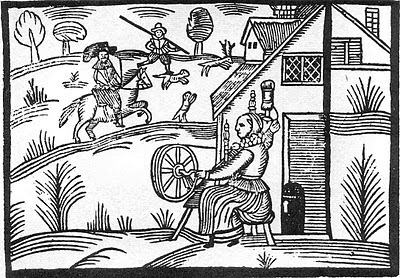 "When people today think about spinning wheels, they usually think of Sleeping Beauty, a fairytale princess, pricking her finger. In fact, working by hand at a spinning wheel was what most ordinary women in England did for the 400 years before the Industrial Revolution," said Professor Styles. "This was a skilled occupation, vital to the success of the textile industries that made England rich. Yet historians often dismiss hand spinning as part-time, unskilled work for ignorant country women. They treat it as an inefficient obstacle to increased productivity, ripe for replacement by the mechanical inventions of the Industrial Revolution."

According to Professor Styles, the absence of a study into hand spinning has become increasingly anomalous. Recent years have witnessed a huge expansion of historical research into the history of late-medieval and early-modern England. It has revealed that already, before the Industrial Revolution, England had become one of the world’s richest, most successful economies. The quality of English cloth, and the spun yarn from which it was made, was crucial to this success.

In the course of this new research, historians have explored all kinds of subjects that have to do with spinning, including gender relations, consumption, fashion, technological innovation, household economics, labour relations, globalization and economic policy making. “Yet we still lack a study that focuses specifically on spinning, which was, by the eighteenth century, the most common form of non-agricultural work in England,” said Professor Styles. “Spinning in the Era of the Spinning Wheel, 1400-1800 will fill that gap.”

Spinning in the Era of the Spinning Wheel, 1400-1800 aims to provide a comprehensive history of hand spinning in England between 1400 and 1800, a history that approaches the subject from the whole range of relevant perspectives, treating spinning as a practice that was at one and the same time material, technological, economic, commercial, legal, cultural, gendered, and global.