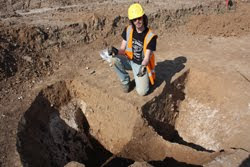 An archaeological dig covering over six kilometres of land in England has come up with discoveries from the medieval, Roman and Bronze age eras. The work is now being filmed by the BBC for a documentary Digging for Britain, which will be broadcast in August.

The Archaeology of the East Kent Access Road project is a survey being done in preparation for a new road being built on the Isle of Thanet on the eastern coast of England. The road runs close to the mouth of the Wantsum Sea Channel, an important route that was a gateway for ancient peoples into Kent used by ships until medieval times.

The finds include twelve Bronze Age ring ditches (the remains of burial mounds) dating back over 3,500 years, Iron Age enclosures and a village which lasted into Roman times at Ebbsfleet.

There are also areas of Roman settlements, their fields and track ways, Roman and Saxon cemeteries, Saxon buildings, and a large Saxon enclosure with huge quantities of shellfish, evidence of the preparation of a feast or processing later provisions. 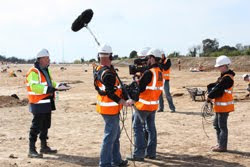 More recent finds include the remains of trenches excavated to defend Manston airfield during the Second World War.

Kent County Council principal archaeological officer Simon Mason, said, “Thanet was the gateway to England in ancient times and it’s no surprise that this dig has unearthed so many valuable remains. What is impressive is the story it tells us about how people were living here.”

Local people are being invited to get involved with the big dig. Volunteers can work alongside professional archaeologists during a community excavation from 10 May until 4 June, and school visits are being arranged. Archaeologists are also available to talk to schools, societies and local organisations.