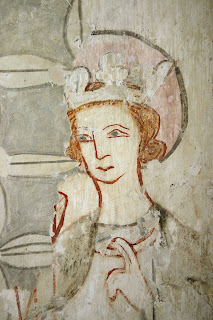 A project aimed at conserving and interpreting a unique series of medieval church wall paintings has been short-listed for a prestigious British national award. The Lakenheath Wall Painting Project, which marks its first anniversary this month, has been selected as one of the finalists in the ‘Awards for the Presentation of Heritage Research 2010’. These annual awards, sponsored by English Heritage, aim to encourage researchers to present their research on British and Irish archaeology, historic buildings and heritage conservation, to the wider public.

The Lakenheath Wall Paintings Project began in January 2009 with the aim of carrying out important conservation work of the unique series of medieval wall paintings in the church at Lakenheath, Suffolk. The paintings were originally discovered during restoration work carried out on the stunning medieval church in 1864. The lime wash, which had covered these colourful examples of medieval art since the reformation, was removed to reveal at least five individual and unique painting schemes – the earliest of which is thought to date to the early 13th century. Having been exposed to the elements for over a century urgent work was needed to maintain the stability of the paintings and the plaster onto which they were painted. The physical conservation work was undertaken by a team of expert conservators from the Oxfordshire based Perry-Lithgow Partnership and took five weeks to complete.

A key element of the Lakenheath project was to encourage a wider interest and understanding of these stunning images amongst both the local population and the wider public. During the actual physical conservation work the public were encouraged to come along a meet the team, watch the work in progress and learn a little more about the church and its paintings. The project also hosted two events as part of the 2009 Festival of British Archaeology and a number of lectures, site visits and open days. In addition, Roger Rosewell, the acclaimed author of Medieval Wall Paintings in English and Welsh Churches

, presented a special guest lecture to mark the project’s completion.

Father Robert Leach, the vicar of St Mary’s, commenting on the short-listing of the project for the award said, ‘We are delighted with this news and are deeply grateful to the Heritage Lottery Fund and others for proving the funds to enable this project to be carried out. To be a finalist in a national award programme is a real recognition of all the hard work put into the project by the conservators, church-wardens and people of Lakenheath.’

Project Manager, Matthew Champion, commenting upon the news said, ‘Thanks to the project, the wall paintings at Lakenheath are now recognised to be of national importance and the conservation has ensured that they will be preserved for future generations to enjoy. However, being short-listed for this award really emphasises that the project isn’t just about relics from the past. These fantastic images were originally paid for and created by the local community. The project has tried to bring local people back into their church to rediscover their own parish heritage.’

All the projects that have been short-listed for the award will be presenting their findings to a public audience at the British Museum on the 26th February. The audience will be invited to help the panel of judges, chaired by archaeologist Julian Richards, assess the presentations and the winner will be announced later that evening.