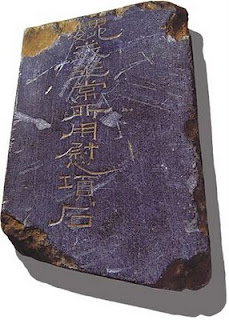 Cao Cao, a politician and general from the Three Kingdoms period (AD 220-280), couldn't have been more wrong in his thinking that as long as his tomb was built with austerity, tomb raiders would leave it alone and he could enjoy peace in his final resting place.

Despite its austerity, with burial sacrifices consisting mainly of stone carvings and his personal daily utensils, the tomb had been plundered many times by the time it attracted the attention of archaeologists. A protective excavation began in December 2008.

Now completely excavated more than one year later, the tomb won't go back to the serenity Cao had hoped for, because local authorities plan to build a cultural relic park around the tomb. Authorities plan for it to become a popular tourist destination, that contributes much to local economy.

"The tomb has the potential to become another hot tourist destination of Anyang," said the director.

On the same day, Yang Limeng, a cultural official from Anyang, told the press that "many tour agencies from Taiwan, Hong Kong, Macao, even from foreign countries like Japan and South Korea, have shown great interest in the newly discovered Cao's tomb".

On-site changes are even more tangible. The announcement of the tomb's discovery on Dec 27 has put the quiet village of Xigaoxue in the spotlight ever since. About 1,000 to 2,000 visitors flooded into the village after reading reports about the tomb.

Some villagers living near the site have already built temporary stands hawking souvenirs from photo services to calligraphy of Cao's poetry. Others are charging an entrance fee of five yuan for visitors stand in their grain fields so they can see the tomb's excavation, which is still restricted to visitors.

"There is no dispute that an archaeological discovery helps bring economic benefits to the local community," said Su Yang, a researcher in the field of social development from the Development Research Center of State Council (DRC). "Archaeological discovery has never been done for the mere purpose of academic discovery, but also for knowledge popularization. And tourism has been proved to be an effective means for that purpose."

In a recent online poll conducted by China's major news portal Sina.com, 49.5 percent of the 25,126 participants voted to restore the tomb back to its original shape to show respect to the deceased. Only about 33.3 percent supports the commercial development of the site.