When archaeologists revealed last month the discovery of Cao Cao's tomb it aroused a lot of interest in the legendary ruler, but also doubts. 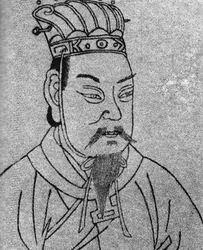 Cao Cao played an important role during the Three Kingdoms period (AD 220-280) and was also known as "King Wu of Wei (Kingdom)".

Soon after confirmation of the discovery of Cao Cao's tomb in Xigaoxue, a village in Anyang county, Henan province, on December 27th, the skeptics started raising questions.

They said the austere burial site did not tally with the legend of him building up to 72 tombs to thwart tomb raiders.

"Historical records said that Cao Cao had built 72 tombs to thwart tomb raiders, so where are the other tombs?" Yuan Jixi, deputy director of the school of Chinese classics at Renmin University of China, was quoted by State broadcaster CCTV.

A number of archaeologists also question the authenticity of the tomb as it lacks Cao Cao's epitaph, which is believed to be the most important proof in identifying a tomb's owner.

"We did expect doubt and controversy," says archaeologist Liu Qingzhu of the Chinese Academy of Social Sciences (CASS), one of the leaders of the excavation team. "We've been thinking about revealing our findings to the public for six months. But we thought it would be better to come up with solid evidence first."

While this evidence has convinced some people, others remain skeptical. They point to the six-year difference between Cao's recorded age upon death, 66, and the male figure unearthed from the tomb, whose age is estimated to be at most 60, derived from analyzing his skull and teeth.

Some have began calling for a DNA test and someone who declared himself Cao's descendant said he would be prepared to take such a test. Experts retorted no one can be sure they are Cao's descendant after 1,800 years.

Li Meitian, deputy professor of history from Beijing Normal University, says if the skeleton of Cao Zhi, one of Cao's sons, can be found then comparison of their DNA would suffice as evidence that Cao Cao is the real deal. Cao Zhi's tomb was discovered and unearthed in 1951, yielding 28 bones, but these were misplaced.

"Unfortunately we have no idea of the whereabouts of Cao Zhi's bones," says Liu Yuxin, director of the Cultural Relics Administration of Dong'e County, Shandong province.

"Even if we had Cao Zhi's bones, I don't think a DNA test would be a good idea," says archaeologist Wang Minghui from CASS, a human bone identification expert, who identified the skeleton unearthed from Cao Cao's tomb. He says a DNA test would damage the bones.

Then, after tourists and journalists visited the excavation site during the New Year holiday they found there are actually two tombs being excavated.

Alongside the mausoleum believed to be Cao Cao's is another tomb built with a similar layout, just 70 metres away.

"We didn't mention the other tomb (at the press conference) because the excavation of that tomb had just started," says Hao Benxing, a researcher from the Henan Provincial Cultural Relics Administration. "We haven't recovered any relics worth mentioning."

Even so, it is thought the smaller tomb might contain confirmation of Cao's ownership of the bigger tomb.

In the bigger tomb, there were also remains of two females, one estimated to be 50, the other between 20 and 25. Experts thought the older female was Cao Cao's wife, buried 10 years later, in accordance with historical records.

But there is a disparity between Cao's wife's recorded age upon death, 60, and that identified by skull and teeth identification of the older female.

So, if the smaller tomb contains remains of a female aged 60, Cao's wife, ownership of the bigger tomb would be much less controversial because it would prove that she was indeed "buried alongside" with him as historical record puts it, says professor Liu Xinchang from Handan Research Institute of History and Culture, Hebei province.

He says the archaeologists could have waited three months to find this out.

"After one year of excavation and research, we've secured enough evidence to make our conclusion. Secondly, news of the excavation reached some of the media," Liu says. "It is Cao Cao who we are talking about here. If speculation began he would appear to be more a legend rather than a character. We want our findings to reveal historical truth, not to start or repeat a legend."