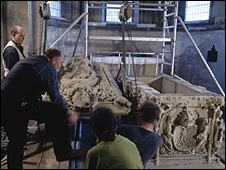 Remains of an Anglo-Saxon queen may have been unearthed in a German cathedral, a Bristol University research team says.

They believe a near-complete female skeleton, aged 30 to 40, found wrapped in silk in a lead coffin in Magdeburg Cathedral is that of Queen Eadgyth.

The granddaughter of Alfred the Great, she married Otto I, Holy Roman Emperor, in 929. She died 17 years later, at 36. Professor Mark Horton, of Bristol's department of archaeology and anthropology, said: "We know that Saxon royalty moved around quite a lot, and we hope to match the isotope results with known locations around Wessex and Mercia, where she could have spent her childhood. If we can prove this truly is Eadgyth, this will be one of the most exciting historical discoveries in recent years."

The discovery of the tomb was made during a wider research project into the cathedral in 2008 by a German team.

Eadgyth died in 946 and was buried in a convent at Magdeburg, a city given to her as dowry by Otto. Two late medieval statues in the cathedral there are thought to portray Otto and Eadgyth and in 1510 an elaborate late -Gothic tomb was erected in the chancel, although it was long thought to be a cenotaph. 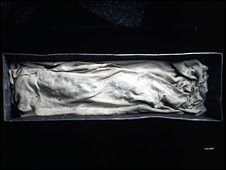 When the tomb was opened in 2008, however, a lead cist 70cm long was found inside, bearing an inscription that read: “The rescued remains of Queen Eadgyth are in this sarcophagus, after the second renovation of this monument in 1510.” The cist contained the bones of a woman aged in her thirties, wrapped in white silk.

Professor Harald Meller, who led the 2008 project, said: "We still are not completely certain that this is Eadgyth although all the scientific evidence points to this interpretation. In the Middle Ages bones were often moved around, and this makes definitive identification difficult."

Recent research by Dr Estella Weiss-Krecji has shown that royal remains were often taken long distances for burial, and sometimes boiled down to extract the bones, which were sewn into an ox hide for easy transportation. Mistakes could occur, and also bones could be later disturbed: those of the Kings of Wessex — many of them Eadgyth’s relatives — in Winchester Cathedral were thrown out during the Civil War, and when they were recovered were thoroughly mixed. Modern techniques would allow some restitution, and the current examination of Eadgyth’s presumed remains will employ just such procedures.

Samples have been brought to the University of Bristol this week for further analysis under the supervision of Professor Mark Horton. “Bones, especially teeth, take up minute quantities of strontium, the isotope ratio of which varies according to the age of the underlying geology.” he said. “This ratio can therefore be used to work out where the individual spent the first 14 years of so of life; we hope to be able to map where this individual spent her childhood and so confirm that she came from Wessex, not Germany.

“The English Royal Family only came into existence with the acknowledgement of Eadgyth’s half-brother, Athelstan, as king of a unified England in 937. Athelstan’s bones were lost in the medieval period from their burial place in Malmesbury, so it is very likely that the bones of Eadgyth, who died in 946, can claim to the oldest surviving from English royalty, and certainly among the most complete.”

If Queen Eadgyth is identified, her remains are likely to be the oldest surviving remains of any member of the English royal family. Her brother, King Athelstan, is considered to have been the first king of England after he unified various Saxon and Celtic kingdoms after the battle of Brunanburh in 937, Bristol University said.

After marriage, Queen Eadgyth lived in Saxony and had two children with Otto. Their direct descendents ruled Germany until 1254 and formed many of the royal families of Europe that followed.

A special one-day conference is being held today at the University of Bristol, entitled 'Princess Eadgyth of Wessex and her World'. Besides giving more details about the find, it will also place the discovery within the context of late ninth century Merciaand Wessex, where Eadgyth grew up, the role of the Church, and especially the cult of St Oswald, that flourished in tenth-century southern Germany.