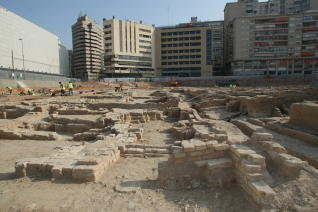 King Alfonso X The Wise walked on the same ground as the archaeologists who, nearly 800 years later, are busy investigating the recently discovered San Esteban archaeological site in Murcia. And wisdom appears to have finally prevailed after the medieval Arab complex was almost dug up to make way for a giant parking lot.

Half a year ago, digging work for an underground parking structure yielded the remains of 48 Arab homes, seven palaces and even a small mosque dating back to the 13th century. The ruins extend over a hectare of land located under the current site of the San Esteban Palace, a 17th-century convent that now houses the seat of Murcia's regional government.

The mayor of Murcia, Miguel Ángel Cámara, said he would make both the parking lot and the archaeological site compatible by removing the historical remains and rebuilding them over the parking space. This plan sparked a great controversy and there were grassroots campaigns to stop the construction work - including a Facebook page that drew thousands of supporters.

Now, after weeks of pressure, authorities have backtracked on the original plan, announcing that the site will receive, as early as this week, a protected status known as Bien de Interés Cultural (asset of cultural interest), the maximum protection any monument in Murcia can obtain.

"We have won all the battles and also the war," said one member of the citizen's platform created to defend the San Esteban site, as he waited outside the regional headquarters with 20 other activists on Monday. Inside, their spokesperson, university professor Antonio Malpica, was meeting with Murcia president Ramón Luis Valcárcel. 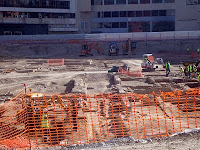 According to the experts who analyzed the site, "it is an urban network around the [current] palace and church of San Esteban, divided in two parts: a large one with a little under 50 small homes, and another one with a series of palace-like complexes presumably used to house high dignitaries of the era." The layout also includes a large avenue, a small prayer hall, the base of a minaret and a reduced necropolis where experts think they might find human remains.

The original technical report, by experts from the regional government, called for the remains to be taken out of their original site "to preserve them from humidity, keep digging, and be able to build the underground parking lot." But part of the team that worked on the dig, including its co-director, asked that the remains be kept where they are, saying that "to take them apart and move them is to destroy them," and that "there is no precedent for a decision of this type, because it would expose Murcia and Spain to international ridicule."

The report was naturally well received by Murcian authorities, who criticized "those who dare to question the technicians' honor." 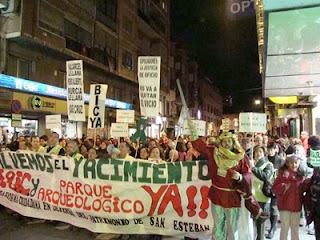 But opposition to the project quickly spread beyond the political arena, with scientists, university professors, environmental groups, the Murcian architects' association and intellectuals rejecting the parking plan.

In late November, a webcam installed in a nearby apartment by activists to monitor activity on the site showed that about 40 workers were loading small pieces of brick onto wooden boards. The dismantling of Murcia's Arab site had begun. Asked to produce his license to carry out the work, the site manager admitted he had none. That same evening, a group of angry citizens filed a complaint with the Civil Guard, citing "archeological pillaging." The attorney's office filed its own complaint with a local court, whose judge ordered an immediate halt to the dismantling work.

In December, Murcian premier Valcárcel announced the parking project had been dropped, taking pains to underscore that he had made this decision weeks earlier on the strength of "the spectacular nature and magnitude of the site," rather than due to public pressure.