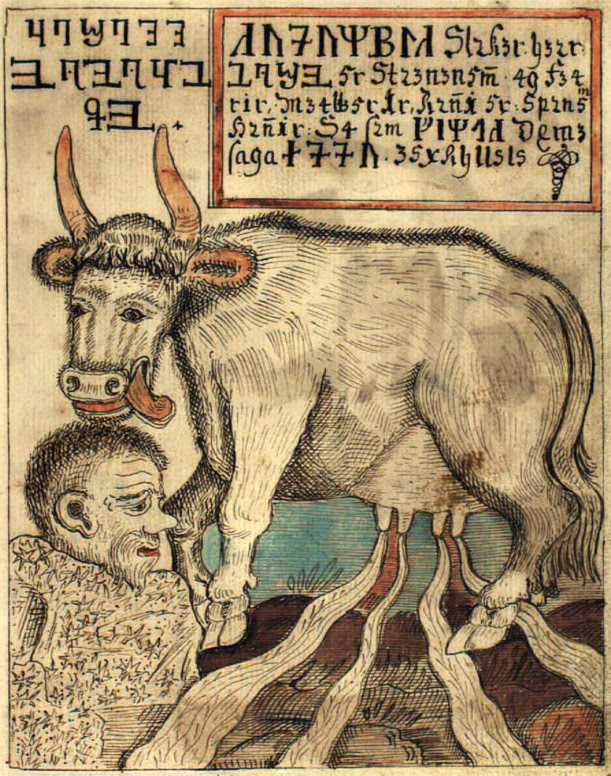 A recently published article has found that cows and the milk they made were a vital part of Irish agriculture and society during the Early Middle Ages.

"The Decline of the Cow: Agriculture and Settlement Change in Early Medieval Ireland," was written by Finbar McCormick for the latest issue of Peritia: Journal of the Medieval Academy of Ireland. It uses documentary and archaeological sources to find that "cattle, more specifically cows, were of exceptional importance in the lives of early medieval Irish."

McCormick explains that the cow was the basic unit of wealth, with fines, tribute and marriage presentations being paid in cows. But it was not necessarily the cow that was valuable, but the milk she could produce. A whole range of dairy products were produced in early medieval Ireland, such as milk, cream, butter and cheese. The 10th century text Tochmarc Ailbe states that milk is the best food as it "is good when fresh, good when old, good when thick and good when thin."

The article also notes the importance of cattle raiding in early medieval Ireland, adding that ringforts between the sixth and eighth centuries were designed specifically to protect cattle. There is an estimated 40-50000 ringforts in Ireland - farms that had a bank and ditch which could hold the cows if they were threatened by raids or attacks. "Protective scatterred farmsteads of this type do not occur anywhere else in contemporary western Europe and they are a unique response to the value system of Ireland," McCormick writes.

McCormick also finds that the predominance of cows in Irish society began to decline by the late-eighth century, with farmers now starting to build ringforts that had an elevated setting for the dwellings, which were designed to be more protective of people. Furthermore, there was an expansion of grain processing, as seen by archaeological evidence such as mills.

McCormick suggests that Ireland was changing in the late-eighth and ninth centuries, becoming a "slave economy" where farms were changing from being ones that primarily raised cattle, to ones that grew cereals - a more labour intensive process that required the use of slaves and the means to protect them.

The article, "The Decline of the Cow: Agriculture and Settlement Change in Early Medieval Ireland," by Finbar McCormick appears in Peritia, Volume 20 (2008)