Late medieval walls and the foundations of what appears to be a military spur, which formed part of the outer defences at Edinburgh Castle, have been uncovered by archaeologists on the castle esplanade.

The defences which date from at least the 16th century were discovered during the ongoing foundation works for the new tattoo stands.

Service trenches have revealed two separate structures about two metres beneath the esplanade, which are now being investigated by CFA Archaeology working for Edinburgh Military Tattoo Ltd. The excavations are being carried out as part of Scheduled Monument Consent granted by Scottish Ministers for the new Tattoo stands.

The first trench, which was discovered earlier this week, revealed the remains of a wall around 2 feet wide, which is thought to be part of the north perimeter boundary wall between the city and the castle.

The opening of a second trench uncovered what initially looked like a continuation of the boundary wall, but now appears to be separate remains, akin to the foundations of a Spur, a 16th century defensive bastion which protected the entrance to the castle. Both appear in a 17th century drawing by Gordon of Rothiemay however until now the precise location remained unknown. 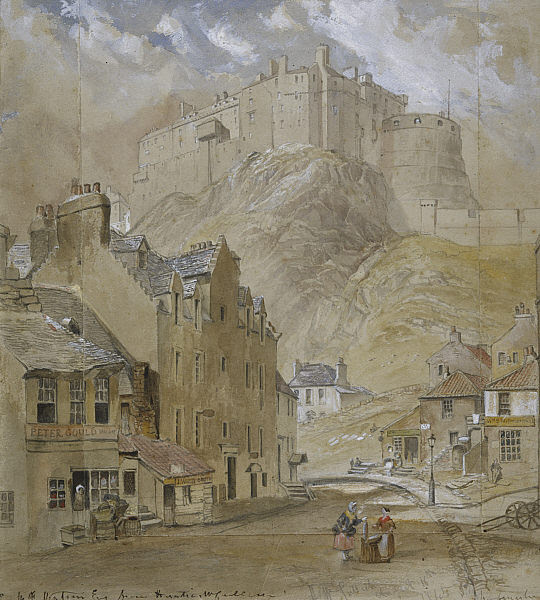 Fiona Hyslop, Minister for Culture and External Affairs, said; “Edinburgh Castle has a long and important role at the centre of the country’s history. Finds of this kind are extremely valuable in terms of improving our understanding of the development of the castle, and its defensive needs during key periods in time, as well as showcasing effective modern day partnership working between the heritage and construction sectors.”

Peter Yeoman, Head of CRT for Historic Scotland, who look after both Edinburgh Castle and the castle esplanade on behalf of Scottish Ministers said, “As the remains have effectively lain covered for over 250 years, this is a unique opportunity to learn more about the esplanade during this period in the castle’s history.

“Until recently we have only had early drawings to go by, but we are now able to examine the archaeology and record and preserve as much of it as is possible for future generations.

“The remains are too deep down to be displayed, but to have this knowledge is a great step forward. In carry out these works Edinburgh Military Tattoo Ltd are to be commended for applying best conservation practice in ensuring that any discoveries are properly preserved and recorded.”

The esplanade was formed in 1753 to create a parade ground for the military. As part of this process large amounts of levelling was deposited on the area immediately in front of the castle, covering up earlier buildings.

Archaeologists will continue to work with the Tattoo Company and their contractor Sir Robert MacAlpine to record the remains before they are buried once more.