Natalie Zemon Davis discusses the challenges of being a Historian

Natalie Zemon Davis, an influential and widely-regarded historian, talked about her own career and the challenges of being a historian at the University of Toronto last night.

The event, hosted by the university's Department of History and the Graduate History Society, was billed their first Becoming a Historian event. It is described as a chance to explore "the creative process of becoming, being and remaining an historical interpreter."

Over sixty people, many of them graduate students, attended the informal talk, were Professor Davis shared some of the important events in her academic career and gave advice. Davis described her continuing interest historical research and how she saw herself "as a historian who could write critical history."

She noted how her research and career could change because of unforeseen circumstances: in 1952 she began doing research in French archives, but then had her passport revoked by American authorities after speaking out against the House Committee on Un-American Activities. It forced her to change her work and start looking for research in Rare Book Libraries throughout the United States. This resulted in Davis being able to make use of a vast amount of early printed material and deliver fascinating new views on the culture of printing workers in early modern France. 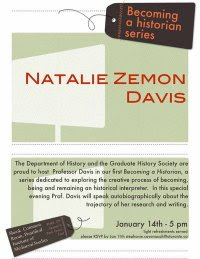 Davis also talked about her focus of interest has expanded throughout the years, to the point where she found herself going beyond the bounds of Europe with her book Trickster Travels: A Sixteenth-Century Muslim Between Worlds

as well as examining issues on women's history from more than just a Western European point of view.  She encouraged her audience to look at history outside of their own fields of knowledge and "don't just situate yourself in a national boundary" when doing historical research.

Davis also took questions from the audience, which ranged from how she got interested in being an academic historian to how to manage a family and work. For the latter question, she replied that patience and the ability to quickly transition from being one moment a mother and the next a historian were key in being able to balance the demands of both tasks.

When asked about her ability to reach a broad market with her books, Davis replied she would focus her writing in a way that an "intelligent reader" would be able to follow along without already knowing who the characters and events are beforehand. At the same time, she advised that when writing a dissertation the one should assume a professional readership.

Professor Davis has earned a reputation as a top scholar of the early modern era. Her publications include Slaves on Screen: Film and Historical Vision

, The Gift in Sixteenth-Century France

and The Return of Martin Guerre

. The Return of Martin Guerre was later made into a movie.

Click here to read our Interview with Natalie Zemon Davis.