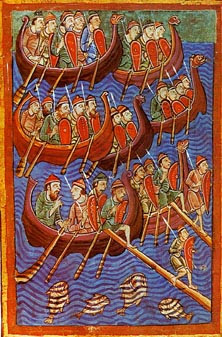 A new theory about what drove the Vikings to raid Western Europe in the late eight and ninth centuries has been published. It suggests that the Vikings in Denmark were reacting to a threat from the Carolingian ruler Charlemagne, who was seeking to destroy their society and impose Christianity on them.

The theory was put forward by Robert Ferguson in an article for the December 2009 issue of BBC History Magazine.  His book, The Hammer and the Cross: A New History of the Vikings

, was also published in November.

Starting in the 790s, Viking ships began raiding throughout Western Europe and the British Isles, often targeting monasteries. Ferguson points out that peaceful contacts between the Norse peoples and Christian societies, such as trading with each other. He therefore asks why did the Viking attacks begin when they did?

But with the accession of Charlemagne in 771, the Carolingians began to implement a new program of converting their pagan and neighbors and promoting Christianity.  Charlemagne launched numerous invasions of the Saxon peoples led by Widukind.

In a podcast interview, Ferguson adds the goals of Charlemagne were to force the Saxons "to abandon their culture, political system, beliefs and everything, and make them part Christians and part of his empire."

Ferguson notes an episode of "ethnic-cleansing:" when, in 782, Charlemangne's armies forcibly baptised and then executed 4,500 Saxon captives at Verden, a town close to Denmark.  The Danes would have been well aware of what was happening with the Saxons anyways, as Widukind was married to sister of the Danish king, Sigfrid, and often took refuge in Denmark to escape the Carolingians.

Considering the situation, Ferguson writes, "Should the Vikings simply wait for Charlemagne's armies to arrive and set about the task? Or should they fight to defend their culture?"

But the Norse could not fight the Carolingian military directly - instead they went after soft-targets, such as monasteries, which were symbols of the growing Christian encroachment. Ferguson says, "everything points to a hatred that goes beyond just robbers who just wanted money."

The article goes on to describe these early Viking attacks, and how their raids expanded throughout Europe, with Viking kingdoms developing on the British Isles and elsewhere.

Several other explanations have been put forward for Viking violence, such as innovations in shipbuilding which encouraged piracy, and overpopulation in Scandinavia, which forced many of its people to leave their homeland in search of fortune.

The article, "The Vikings: Why did their violent raids begin?" is in the December 2009 issue of BBC History Magazine. Click here to download the podcast which contains their interview with Robert Ferguson.

Click here to see our section on Medieval Vikings