The Canterbury Tales, Sir Gawain and the Green Knight, and medieval mystery plays – these are all expectations most students would have for a Middle English Literature class. But honing one’s acting skills is probably not high on the list of expectations. Indiana University-Purdue University Fort Wayne (IPFW) students in Damian Fleming’s class got a mix of both this past semester along with a greater understanding of medieval literature.

Fleming, Ph.D. and assistant professor of English and linguistics, divided his class into groups and challenged each to re-enact a York mystery play while maintaining the same amount of language, rephrasing it into modern English, and taking the same liberties as they would have in medieval times.

The York Mystery Plays, also known as the York Corpus Christi Plays, were a cycle of 48 plays covering religious history from the creation to the last judgment. They were enacted on the feast day of Corpus Christi in the city of York. The plays followed orthodox teaching, but had a slapstick edge to them. “While these plays are a bit controversial today, the medieval audience wouldn’t have been offended by them,” said Fleming. 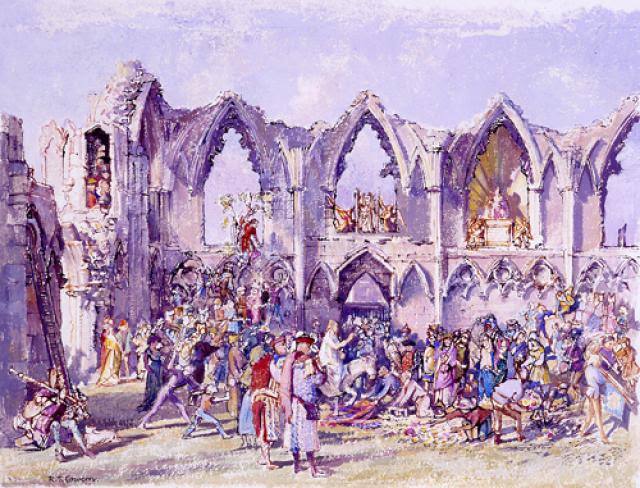 Fleming asked his class to not only translate medieval mystery plays into modern-day language, but also turn those translations into productions that could help their classmates better understand both the Middle English language and the context in which they were performed. His goals were to teach the students how to read literature and translate it, get past the difficulty level and appreciate the information, and feel comfortable.

“I wanted them to get the jokes within the plays themselves,” said Fleming. “I wanted the students to take the same liberties with the material as the original presenters did. This assignment was not based on great theatre, but rather a way to get students engaged in material. Presenting the material in public brought the preparation up a notch.”

So how did the students handle the difficult language and the pressure to perform? Christopher “C.Ray” Harvey, an IPFW senior, worked with his group to enact the story of Adam and Eve’s fall from grace. He said he would recommend other professors use similar techniques.

“Personally, I found the activity challenging, but enjoyable,” said Harvey. “Not to get cheesy/spiritual, but every translation includes part of the translator. Our task was to reinvent the York script, a task that requires one to break down the language and the intent in order to repackage it. Going through this process allowed me to gain a better understanding of the concerns, motivations, etc. of the York authors, especially in terms of their religious lives.”

How did the students fare in their medieval endeavor? Fleming said just about everyone got an A. “We didn't shy away from competition,” said Harvey. “I think competitive spirit probably played a key role in the York tradition. As people undergo an exhausting tour of an entire town, traveling from scene to scene, I imagine that every group worked to make their assigned play stand out.”