A new study examining artistic depictions of the Last Supper over the last thousand years has concluded that the food portions depicted in the famous scene have been getting larger throughout the centuries.

Brian Wansink, of Cornell University, and Craig Wansink, of Virginia Wesleyan College, examined 52 pieces of art that shows the Last Supper of Jesus Christ, an important event written about in the Christian gospels. The two brothers call this "perhaps the most commonly painted meal," making it their choice to see how artists portrayed the sizes of foods and plates.

Their premise was that, "if art imitates life and if food resources have become generally more available over the past millennium, we might expect the size of the food portions depicted in paintings to increase over time." 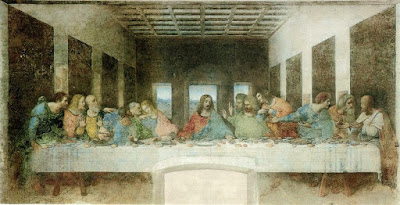 After examining the paintings, which date back roughly to the year 1000, and include many from the Middle Ages, they did find that the size of the entrées had grown by 69 percent, while plate size has increased 66 percent and bread size by about 23 percent.

They also discovered that while they were unable to tell what the main course was in nearly half of the depictions, they did find that fish or eel (18%), lamb (14%) and pork (7%) served as the main dishes in many of the scenes.

Their conclusions have been disputed by Carl Pyrdum III, a medieval scholar, who criticized the study on his blog Got Medieval. He notes that the authors only used 52 artworks of the Last Supper, which would be a small minority of those available, all of which were from the same book: Last Supper

. "It's like they literally grabbed the first book on the Last Supper they saw and decided to end their research there," Pyrdum writes.

He also details various problems related to medieval art that the authors did not take into consideration, such as a lack of proportional representation. Pyrdum concludes "that comparing the size of pieces of food to holy apostolic body parts is so much nonsense, at least for the first 400 years that the study claims to discuss."

The article, "The largest Last Supper: depictions of food portions and plate size increased over the millennium" appears in the April issue of the International Journal of Obesity.