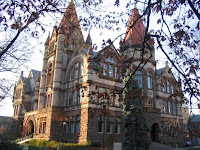 University of Toronto medieval historian Nicholas Everett and Walid Saleh, a scholar of religion and Near and Middle Eastern civilizations, have each been selected to receive a highly competitive New Directions Fellowship from the Mellon Foundation to pursue cross-disciplinary research. It is the first time the fellowships, created in 2002, have been awarded outside of the United States.

The New Directions Fellowships are unique in that they enable young humanists to explore new lines of research by gaining additional expertise in a field outside of their area of specialization. For Nicholas Everett, who holds a PhD in history, the fellowship means he can do research shedding new light on the history of medicine and science by undertaking specialized coursework in pharmacology and toxicology.

"There has been an explosion of interest in the medicinal potential of plant, mineral and animal products of the last decade. This renewed scientific interest in natural product pharmacy provides opportunities for a more sophisticated understanding of human interaction with the natural world in the past, and the rationale behind historical traditions of drug use, discovery and theory," Everett says. "By understanding the chemistry of natural drugs and the processes they affect, historical texts on pharmacy can be read more sensitively, claims more effectively evaluated and traditions better understood and explained."

Everett will draw upon his training to pursue three themes in the history of pharmacy which recent discoveries in biochemistry, pharmacology and neuroscience place in a new light: notions of taste and smell in relation to health and pharmacy; traditions of compound drugs; and what constituted proof or the authority to declare a drug effective or safe in the pre-modern world. Tracing these themes across different periods and cultures, says Everett, will make important contributions to our understanding of both the history of science and the history of medicine.

Walid Saleh will use his fellowship to undertake a comprehensive unified history of the Arabic Bible in the Middle East where three of the world's major religions - Christianity, Judaism and Islam - began and still co-exist side by side. It's a research direction that arose quite serendipitously. "While researching the history of Quranic interpretation, my main field, I came across al-Biqa`i (d. 1480) who used the Hebrew Bible and the four Gospels to interpret Biblical references in the Qur'an. This was an unprecedented use of these two scriptures in Islam," says Saleh. The fortunate find led him to realize that no comprehensive study of the history of the Bible in the Islamic religious imagination had been done. "Such a study is essential since the Arabic Bible represents a truly Jewish-Christian-Islamic event in the collective religious history of the Middle East. The presence of active members of the three communities side by side make for a fascinating relationship to the Bible, with each religious community aware of the other's views of the same book," says Saleh. In particular, Saleh plans to undertake serious training in Jewish study, including Biblical Hebrew, so as to chart a detailed history of the ways in which Islamic religious tradition interacted with the Bible and how each religion's interpretation of the Bible affected and influenced the other.

"Scholarship that crosses disciplinary boundaries holds tremendous potential," says Meric S. Gertler, dean of the Faculty of Arts and Science, University of Toronto. "Some of the most exciting discoveries and insights occur when different fields intersect. We are delighted that the Mellon Foundation is not only enabling these two outstanding humanists to pursue their innovative research but is, through the New Directions program, fostering a standard of excellence for cross-disciplinary research more generally."

The Mellon Foundation has long been known for its support of the humanities, arts and higher education. The New Directions Fellowships assist faculty members in the humanities and humanistic social sciences by enabling them to acquire substantive and methodological training outside of their discipline so they are able to work with sophistication on the specific research problems that interest them most. Recipients of the fellowships are relatively early in their careers, having have received their PhD between five and 15 years previously, and so the fellowships are viewed as long-term investments in a scholar's intellectual range and productivity.