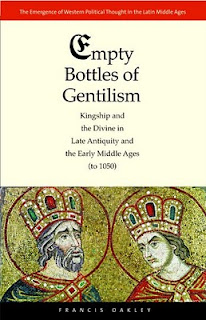 We like to think of the political thought that emerged in the Middle Ages as something of an aberration. Stuck between the secular politics of the ancient and modern worlds, it looks like a strange hiatus where the supernatural held sway.

But that's not how history unfolded, says former Williams College president Francis Oakley. In a groundbreaking new book, he concludes that the Middle Ages, not ancient Greece and Rome, "provided the origins of our inherently secular politics."

Oakley writes in the introduction to "Empty Bottles of Gentilism: Kingship and the Divine in Late Antiquity and the Early Middle Ages (to 1050)

" that the transition from the ancient to the Christian outlook was "a shift, not so much from a secular to a religious viewpoint, as from one ancient and widespread mode of religious consciousness to another and radically different one."

We like to point to Plato and Aristotle’s political thinking as evidence that the ancient world was secular and much like our own, Oakley writes. But the truth is, since the beginning of recorded history, most societies have had sacred kings. The “republicanism” of the ancient Greek polis was just a “fleeting episode.”

Moreover, it wasn't the kind of politics we think of today, since the status of individuals depended on their membership in a group. The modern notions of autonomous individuality and individual rights came later, in the early-modern era but rooted in the "intellectual seedbed" of the Latin Middle Ages.

The direct political legacy, then, "of Greece to the Roman world and of Rome to the European centuries that followed was in both cases a predominantly monarchical one." And so the historical "rhythm" of the ancient, medieval, and modern periods "is not a secular-religious-secular one, but rather, religious-religious-secular."

Oakley's new book proposes, "no less than a paradigm shift in our understanding of ancient and medieval political theory in the global context of sacral kingship," wrote Marcia Colish of Yale University, an expert on the intellectual history of the Middle Ages.

"Oakley confronts all the major historiographical currents relevant to his subject and reveals that none of them can withstand the force of his critique," said Steven Marrone, professor of history at Tufts University. "There is indeed nothing comparable in the literature to this single effort on Oakley's part."

At Williams since 1961, Oakley has a long history with the college. In addition to serving as dean of the faculty from 1977 to 1984 and as president from 1985 to 1993, he is the Edward Dorr Griffin Professor of the History of Ideas emeritus. In his retirement, he is back at Williams as the Bennett Boskey Visiting Professor of History, teaching a tutorial on the evolution of political thought from late antiquity to the 1700s.

Oakley has written widely on the Middle Ages and on American higher education. He is the author of 13 books, including “Community of Learning: The American College and the Liberal Arts Tradition”; “The Conciliarist Tradition: Constitutionalism in the Catholic Church 1300-1870,” winner of the 2004 Roland Bainton Book Prize; “Natural Law, Laws of Nature, Natural Rights,” named as an outstanding academic title by Choice Magazine; and “Kingship: The Politics of Enchantment.” Oakley is also co-editor of three other books and nearly 200 of his articles, translations, and reviews have appeared in print.

Oakley has served as president of the New England Medieval Conference, of the Fellows of the Medieval Academy of America, and of the American Council of Learned Societies (ACLS). He was also chair of the board of the ACLS, of the National Humanities Center in North Carolina and president of the board of the Sterling and Francine Clark Art Institute. He served on the editorial boards of The Journal of the History of Ideas and of Orion: Nature Quarterly. In 1986, he was elected Fellow of the Medieval Academy of America, in 1991 Honorary Fellow of Corpus Christi College, Oxford and, in 1998, Fellow of the American Academy of Arts and Sciences.

He received his B.A. from Oxford University and his Ph.D. from Yale. He holds seven honorary degrees, including one from Williams. Oakley has taught at Yale, Oxford, the University of Toronto, and North Adams State College.

The book was written with the support of a Mellon Foundation Emeritus Research Fellowship. Published by Yale University Press, it is the first volume in a trilogy titled "The Emergence of Western Political Thought in the Latin Middle Ages."