The Carolingians and Old St Peter’s 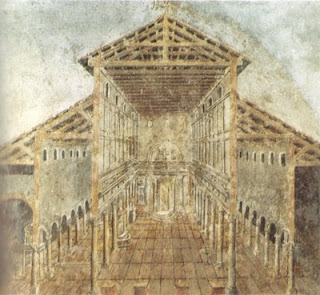 Dr Joanna Story, Senior Lecturer in Medieval History at the University of Leicester, will deliver a keynote lecture at the prestigious Old St Peter’s conference taking place at the British School at Rome from the 22nd to the 25th March.

Old St Peter's was built by the first Christian Roman emperor, Constantine, in the early fourth century, over the site where the Apostle Peter was thought to have been buried. The massive basilica - the biggest in the western empire - became the focus of St Peter's cult and the most important church in western Christendom for 1300 years until its destruction in the 16th century. But despite its central importance and the survival of extensive documentary, artistic and archaeological evidence, many secrets remain to be uncovered.

This major international conference brings together academics from Harvard, Yale, Oxford, Cambridge, Florence, Rome and many other top institutions to deliver papers on the history of the basilica.

Dr Story will deliver a lecture entitled ‘The Carolingians and Old St Peter’s’, which will focus on the gifts given by Charlemagne’s family to St Peter which were placed within the basilica.

Dr Story commented:“Old St Peter's was a vast structure that fired the faith and imagination of kings and pilgrims throughout the Middle Ages. It was almost totally destroyed during the Renaissance, but surviving fragments and eye witness accounts that date from as early as the eighth century mean that we can reconstruct in detail its function as a ‘theatre’ of worship, burial and power throughout the Middle Ages.”

‘Old St Peter’s Conference’ takes place from the 22 – 25 March at the British School at Rome. To visit the conference’s website, please visit http://www.open.ac.uk/Arts/oldstpeters/