Can The Secret of Kells win an Oscar?

The 82nd Academy Awards take place tonight, and many medievalists will be cheering on the once-little known The Secret of Kells as it goes up for an Oscar for best animated film.

Although it is considered a longshot to win an Academy Award (the four other productions nominated for best animated feature film are "Up", "Coraline" ,"Fantastic Mr. Fox" and "The Princess and the Frog") the Irish film is getting a lot of positive buzz. 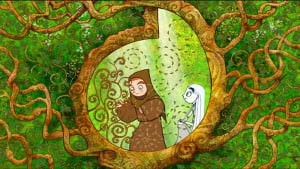 The Secret of Kells tells the story of 12-year-old Brendan (voiced by Evan McGuire), who lives an insulated life in a virtual fortress of a medieval abbey under the constant watch of his uncle, the stern Abbot Cellach (Brendan Gleeson).

But the arrival of Brother Aiden (Mick Lally), a master illuminator in possession of the magical but unfinished Book of Kells, has a life-changing effect on Brendan, motivating him to let his fertile imagination be his guide as he embarks on a quest that takes him well beyond the abbey's protective walls.

The 33-year-old Irish director Tomm Moore says getting nominated for an Oscar "was a surprise for everyone. We barely qualified, because we only had a brief qualifying theatrical run in Los Angeles and New York last year, and I guess enough people saw it and liked it. We were shocked, really."

The film has rarely been seen in North America - just a few festivals - but a word-of-mouth campaign helped the film, which was made for only $8 million US, helped it to gain attention of the Academy of Motion Picture Arts and Sciences.

itself, which is kind of the high point of Irish art and visual art, from the ninth century. It’s still on display in Trinity College in Dublin. It’s survived all sorts of fighting, attacks, and different things. Everybody’s familiar with Celtic designs, which show up in pubs or tattoos or album covers or whatever. But all of that really started out in the Book of Kells. There’s an amazing history, lots of legends and stuff surrounding it, and we thought, there’s got to be a movie in there somewhere."

He also found that the Book of Kells itself lent itself to their portrayal of a ninth-century Irish society that was connected to the rest of the world. "One of the things they don't understand is that there are inks and patterns and designs in the Book of Kells that come from all over the world," said Moore. "There's some ink that seems to have come from Afghanistan; there are patterns they've linked to Morocco. It's fascinating stuff: They've found bones of pet monkeys, things like that. Stuff we didn't even use in the movie. There was a lot of trade and interaction, a lot of people coming to Ireland from mainland Europe for refuge. Maybe it was all down to trade and dialogue, and maybe there were all sorts of people from all over the world living in Ireland at the time. We thought it was a nice reflection of how cosmopolitan Irish society has become today."

The flat, stylized drawings in The Secret of Kells are what Moore calls an Irish style of animation: "And because we were working with a limited budget, we had to be very creative in how we pulled it off. We were looking at medieval art, mainly. In a lot of pre-Renaissance art there’s very little perspective, and I think it really lends itself to the flat frame. We wanted to get further and further from the American and Japanese influences that you see in animation these days."

The filmmakers hope that the Oscar nomination will help it get a wider distribution in North America and boost sales of an upcoming DVD release. While Moore thinks that the movie Up will be likely the winner of best animated picture, he adds "We kind of won big just by getting this nomination. We never thought that could happen."