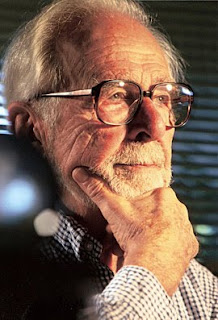 Charles Muscatine, a University of California, Berkeley, professor emeritus of English, a scholar of Chaucer and medieval literature, and an educational reformer known for refusing to sign a state loyalty oath during the McCarthy era, died of an infection in Oakland on Friday, March 12. He was 89.

At a 1999 conference on the loyalty oath, Muscatine explained that refusing the pledge some 50 years earlier “was related to a disease I caught from my father, a Russian immigrant, and that is, acute idealism and acute optimism about the American way of life. And I had early seen in my academic career a kind of nexus between teaching and preservation of American democracy.”

During World War II, he served in the U.S. Navy as a lieutenant and participated in war maneuvers in Sicily, Salerno, North Africa and in Normandy on D-Day. Muscatine received the Navy Commendation Medal for his bravery at Normandy’s Omaha Beach.

Muscatine and his wife, Doris, moved to Berkeley in 1948, when Muscatine joined the English Department as a specialist in medieval literature. A year later, he refused to sign the anti-Communist loyalty oath required by UC Regents of university employees, primarily because he said he considered it an unethical intrusion into academic freedom.

Muscatine and 30 other UC faculty members – including David Saxon, a UCLA professor who later became UCLA’s president, and Edward Tolman, a UC Berkeley psychology professor for whom the campus’s Tolman Hall is named – were fired for their refusals. After several months of unemployment, during which he was in part supported by sympathetic members of the UC and other university faculties, Muscatine took a teaching post at Wesleyan University in Connecticut.

He returned to UC Berkeley in 1954, when the California Supreme Court declared the loyalty oath unconstitutional, and non-signers were invited back. Muscatine became a full professor at UC Berkeley in 1960.

He was in the public eye before, during and after the 1960s’ Free Speech Movement, gaining widespread attention as chair of the Select Committee on Education, which in 1966 produced “Education at Berkeley,” or the “Muscatine Report.” The controversial document anticipated many student demands and included recommendations for instituting small, student-based and student-led interdisciplinary courses.

The same year, Muscatine criticized undergraduate education as a “mechanized training ground for the upper reaches of the labor market” and said “political turmoil feeds on educational failure.”

Muscatine told California Monthly magazine in 1999 that he loved teaching freshman English, calling it “the foundation of a democratic education, if what you want is a literate public, a thoughtful public.” He wrote a book, “First Person Singular

” (1973), to help teach students to write by reading famous, first-person examples of writing.

He retired from UC Berkeley in 1991, but continued to write, lecture and advise other schools in support of major changes in the teaching of American college students and in teacher training.

." In the book, he reiterated points he had been making for years: that university professors spend too much time learning and too little time teaching, and that the undergraduate curriculum overemphasizes memorization and note-taking.

“He was a teacher to the core, continuing to help students with their writing, thinking and studying up until the end of his life (literally),” said his daughter, Lissa Muscatine. “Not only was there an assortment of young students who would come by to talk to him and pick his brain, he became a reading tutor over the past year and would go down to the public library on University Avenue once a week to work with an illiterate man he had been paired with. It gave him great satisfaction.”

In addition to his books on educational reform and medieval literature, Muscatine co-edited the popular "Borzoi College Reader

,” which went through six editions. He also wrote “Chaucer and the French Tradition

Muscatine was chosen to deliver UC Berkeley’s 1971 Charles Mills Gayley Lecture, the highest distinction the English Department can confer on one of its faculty members. He received the Berkeley Citation in 1991, one of the campus’s highest honors in recognition of university service.

Muscatine served on the board of directors of the Northern California chapter of the American Civil Liberties Union and was a member of the Modern Language Association, the Medieval Academy and Phi Beta Kappa. He also was a fellow of the American Academy of Arts and Sciences and served as president of the New Chaucer Society from 1980-1981.

He and his wife, Doris, were known for hosting memorable parties at one of the first “modern” houses in the Berkeley hills, as well as for the fruits of a vineyard they co-owned for about 20 years in Napa Valley. Muscatine became an avid amateur pilot after starting out with lessons around the age of 50, and once flew himself across country and back in a single engine Cessna. He also skied until the age of 83. Family members said Muscatine was also known for his keen and unwavering sense of humor.

He died at Kaiser Permanente Medical Center in Oakland. Muscatine is survived by a son, Jeff Muscatine, of Palo Alto, Calif., a daughter, Lissa Muscatine, of Bethesda, Md., and six grandchildren. His wife, Doris, died in 2006. Plans for a memorial service are pending.

Source: University of California at Berkeley