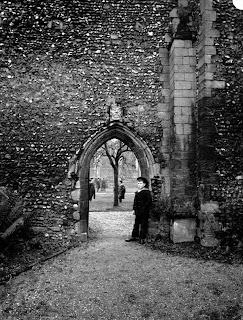 Important work to safeguard the boundary wall of the historic Abbey Gardens in Bury St Edmunds, England, is nearing completion thanks to a £100,000 grant from English Heritage.

Repairs to painstakingly rebuild and underpin the precinct north wall have been going on for seven weeks largely behind the popular aviary in the Gardens and away from public gaze.

It has involved carefully dismantling the top section of the flintwork above and adjacent to the aviary as well as structural repairs to the wall within the aviary itself, all of which is believed to have originated in the 12th century with subsequent phases of repair and alteration, marking the position of the flints and then replacing them after strengthening work has been carried out.

An archaeological dig and recording exercise was undertaken by Suffolk County Council Archaeological Service. This was to inform the conservation repair programme, provide a record of the existing fabric before repair, identifying phasing in the development of the north precinct wall, and undertake the trial dig to determine below ground archaeology that allowed the wall to be successfully underpinned without disturbance to the original medieval fabric.

English Heritage Project Manager David Brown said: “Bury’s Abbey Gardens are of true historical importance to the nation and a real jewel in the crown in the modern context of a thriving Suffolk town. This work is all about maintaining the fabric of this piece of history for generations to come.”

David Gill Suffolk County Council archaeologist, said: “The project afforded an exciting opportunity to re-examine one of the best preserved and earliest of the abbey's buildings, and has greatly increased our understanding of how it once looked and functioned”

Bob Carr, consultant and ex-Suffolk County Council archaeologist, said: “The wall face behind the aviary is by far the best preserved example of early medieval fabric from such buildings; the architectural detailing of both windows and probable doorways survive and date the mass fabric. This is the best survival of Early English style surviving in the Abbey. Overall this area of fabric is assessed as being of the highest importance.”

The formal flower Gardens – seen by many as an oasis of calm in the bustling West Suffolk market town – were established in the 1830s and taken over by the borough council shortly before the First World War.

But the site’s history goes back to early medieval times with the foundation of a religious community in 633 AD. It was renamed after St Edmund, the Martyr King of East Anglia, whose remains were transferred there during the 10th century and was for centuries a place of pilgrimage. In 1214 AD the barons of England gathered at the site to swear an oath to force King John to establish a charter of liberties, which months later resulted in the Magna Carta.

The Gardens are now a major tourist attraction in Bury. As well as the formally laid-out gardens, the site includes an open play area, a sensory garden for the blind, a rose garden dedicated to the USAF airmen stationed in the area during WWII and recreational facilities.