The ongoing excavation of ruins of a 14th century power-broker's palace in Panauti, Nepal has once again made researchers look afresh at the history of the mountainous country.

According to the Nepalese newspaper Republica the The Department of Archaeology has begun an excavation in Panauti to examine the power center of the Bardhan family, who controlled parts medieval Nepal for more than a hundred years. 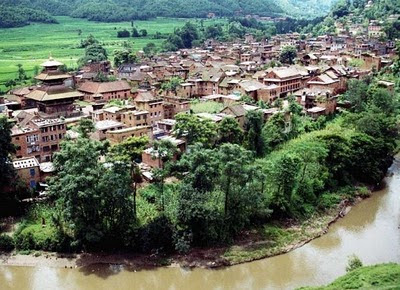 This is the third excavation in the last six years on this site: "If we complete the excavation and conserve it properly, it will create a new vantage point for looking at medieval history, and become a unique monument," said Uddhav Acharya, an archaeologist undertaking the excavation.

According to a Nepalese historian named Dinesh Raj Pant, the Bardhan family appears to have been power-brokers in the 14th century. As feudal lords who ruled seven villages including Banepa and Panauti, the Bardhans had the throne of Kathmandu Valley virtually under their remote control, at least in the mid-14th century.

Pant says that Jay Ram Singh Bardhan, the most powerful of his family, had continuously clashed with Jayasthiti Malla before assisting the latter in toppling King Arjun Dev Malla in 1380. Jayasthiti jailed him twice in 1366 and 1372 and eventually sought his favor to become king.

Jay Ram´s father Anek Ram also played power politics against Ari Malla and Rudra Malla in his time, and even impacted Kathmandu. He renovated Pashupatinath Temple, which was destroyed in 1349 by the Muslim invader Shamsuddin. Pant says there is historical evidence that Jay Ram installed an inscription in Itumbahal in Kathmandu in which he is praised as someone more powerful than the king.

"As the monarchy would often have undergone conspiracies, parallel power centers like the Bardhan family might have had enough space to broker power," Pant said.

"Excavation and conservation of a historic site like this encourages researchers to work on the core reality of our history," he said. "It also helps in understanding the real nature of politics prevailing in our country since ancient times."

Now a chowk or square with an open space measuring 2.5 ropanis on the way to Indreshwar Temple where there are a couple of inscriptions about the Bardhan family, the site actually covered 4 ropanis but was later encroached by private buildings and public structures like the health post building erected by the municipality.

"We have only traced a corner of the palace, a medieval structure presumably built on a square plan. If we can locate another corner in any of the encroached parts, we can tentatively figure out its shape and then go ahead towards conservation," said Acharya.

The excavation team has dug at a couple of points and so far found the pillar bases of the palace and the bottom of thick walls.