Cardiff Castle gets its own Trebuchet

Cardiff Castle in Wales has taken delivery of one of the deadliest military machines of its time, a colossal catapult known as a trebuchet, straight from the set of the forthcoming star-studded movie ‘Ironclad’. The first public firing of this formidable machine in the grounds of Cardiff Castle will take place on Saturday, March 27th.

A trebuchet was a siege engine, developed in the 13th century to attack the solid walls of castles. Using a sophisticated counter balance system, large rocks and stones could be placed in a catapult sling and hurled with such a force they could breach the strongest of fortifications and were capable of firing missiles in excess of 150 kilograms.

The trebuchet acquired by Cardiff Castle was built as an historically accurate replica for the forthcoming British/ American film Ironclad, directed by Jonathan English and filmed entirely on location in south Wales at the Dragon Internatlonal Film Studios. Starring Paul Giamatti, James Purefoy, Brian Cox, Mackenzie Crook, James Flemyng, Derek Jacobi and Kate Mara, the film chronicles the great siege of Rochester Castle in 1215, when a group of rebel Barons defended one of the most important strategic forts in Britain against the ruthless King John who was hell bent on reclaiming his power following the signing of the Magna Carta.

Bringing the trebuchet to its new home at Cardiff Castle has been a collaboration with Runnymede Productions and the team of locally based professional set makers and carpenters who were responsible for initially making and subsequently re-assembling this monster of a machine. The trebuchet stands at 10 metres (approx. 35 ft high), weighs up to 6 tons and it takes 8 people to load and fire the machine. 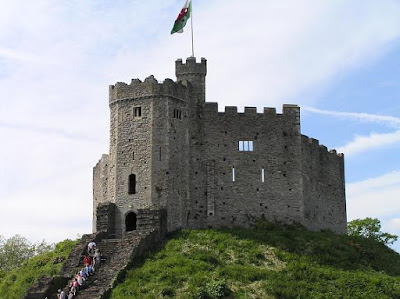 Cardiff Castle has also enlisted the help of ‘A’ level Maths and Physics students from Cardiff High School who have been given the task of working out the mathematical calculations for firing the trebuchet for optimal range and velocity.”

Head of Mathematics at Cardiff High School, Rhiannon Bill said, “This was a fantastic one – off opportunity for the students to test the theory of applied mathematics in a very practical way. It's a perfect cross-curricular project and could also involve the History and Design and Technology Departments."

Nigel Howells, Executive Member for Sport, Leisure and Culture with Cardiff Council said: “The trebuchet is a superb and authentic addition to Cardiff Castle. It is sure to be a huge attraction in its own right and a great addition to the Castle’s burgeoning events programme.”

Cardiff Castle is one of Wales' leading historic attractions, with the site being home to a Roman Garrison, a Norman stronghold and a Victorian mansion. For more information, please go to the Cardiff Castle website.