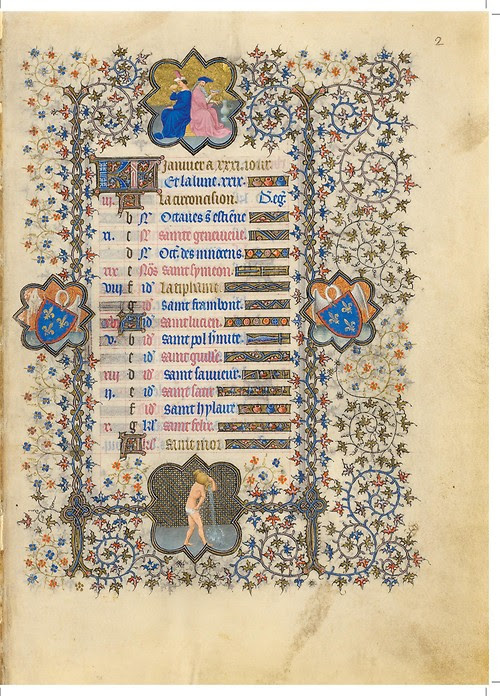 A unique window into the lavish French courts of the Valois dukes of Burgundy and Berry will be offered at The Metropolitan Museum of Art this spring with the simultaneous opening today of two landmark exhibitions: The Art of Illumination: The Limbourg Brothers and the Belles Heures of Jean de France, duc de Berry and The Mourners: Medieval Tomb Sculpture from the Court of Burgundy. The former features the exquisitely illustrated pages of a luxurious prayer book that belonged to Jean de Berry (1340–1416); the latter shows expressive alabaster figures from the tomb of his nephew, John the Fearless (Jean sans Peur, 1371–1419).

Living in a tumultuous age during the Hundred Years' War between France and England, the two men also played key roles in more local conflicts among the various branches of the noble Valois family. John the Fearless instigated the murder of his cousin Louis d'Orléans, and Jean de Berry figured alternately as a mediator between the warring factions and a leader of one of them.

One of the most beautiful manuscripts in the world is the lavishly illustrated medieval prayer book known as the Belles Heures (Beautiful Hours). It was created by the Limbourg Brothers — three of the greatest illuminators in Europe — for one of the most famous art patrons of all time, Jean de France, duc de Berry (1340–1416). The son, brother, and uncle to three successive kings of France, Jean de France commissioned luxury works in many media—from chalices to castles— without regard for cost, but is best remembered for his patronage of manuscripts. Herman, Paul, and Jean de Limbourg were in their teens when he selected them to create a sumptuous Book of Hours for his private prayers, and he allowed the young artists rare latitude in designing the work.

For the publication of a facsimile edition, the book was temporarily unbound and conserved, allowing its dazzling illustrated pages to go on view March 2 at The Metropolitan Museum of Art in The Art of Illumination: The Limbourg Brothers and the Belles Heures of Jean de France, Duc de Berry. The presentation at the Metropolitan will feature all of the book's 172 stunning illuminations, a never-to-be-repeated opportunity to view the manuscript without turning a single page. To evoke the courtly milieu in which the duke lived and the princely tastes of the Valois princes, a selection of related objects from public and private American collections will also be shown.

"The manuscript known as the Belles Heures has been a treasured highlight of The Cloisters—the Met's branch museum devoted to medieval art and architecture—since 1954," commented Thomas P. Campbell, Director of The Metropolitan Museum of Art. "In it are many magnificent illustrations of scenes from the Gospels and the lives of the saints, as one would expect in a book of private prayer. But also contained within this one manuscript are more brilliantly preserved paintings from the first decade of the 15th century north of the Alps than can be found collectively on the walls of all the major museums in Europe and North America. The number of images amazes us; their sheer beauty never fails to astonish. The great achievement of the Limbourg brothers—who were startlingly young when they created this manuscript—is the unique combination of clarity, luminosity, drama, and breathtaking technique with which they ornamented every page. The Belles Heures was truly the laboratory for the development of their artistic vision."

The renowned 15th-century sculptors Jean de la Huerta and Antoine Le Moiturier labored together for more than 25 years on a grand and complex commission: the tomb of John the Fearless (Jean sans Peur, 1371–1419), the second Duke of Burgundy, and his wife, Margaret of Bavaria, which featured 41 alabaster mourning figures, among other elements. Following the precedent of the mourners carved for the tomb of Philip the Bold, the first Duke of Burgundy, de la Huerta and Le Moiturier created astonishingly realistic and highly individualized pleurants (mourners) that serve as a permanent record of the lavish funeral of one of the richest men in medieval France. The figures express a broad range of powerful emotions—from melancholy to desolation—through facial expression, gesture, and the eloquent draping of garments. The renovation of the Musée des Beaux-Arts in Dijon, France—where 37 of the statuettes from the tomb of John the Fearless are housed—provides an opportunity for the unprecedented loan of these figures for the exhibition The Mourners: Medieval Tomb Sculptures from the Court of Burgundy, also opening March 2, the first venue in an eight-city tour. Three additional figures from the tomb of John the Fearless and three from the tomb of Philip the Bold will also be shown, along with an architectural element. The installation at the Metropolitan will be supplemented by related works from the Museum's collection, including the monumental Enthroned Virgin from the convent at Poligny (established by John the Fearless and Margaret of Bavaria) that was carved by Claus de Werve.

"Although powerful representations of sorrow are familiar to us from the funerary art of the late 19th and early 20th century, the expressive power attained by the 15th-century sculptors of these statuettes will be quite a revelation to many of our visitors," Campbell added. "The keen powers of observation and technical mastery of these early sculptors are truly phenomenal. The small statuettes—none of them is taller than 17 inches in height—capture the entire spectrum of emotions connected with human loss. When the sculptures are grouped together, the viewer is transfixed. Carved more than 500 years ago, these eloquent sculptures still speak to us, and they continue to inspire artists today."

The mourners will be presented as participants in a funeral cortège. A choirboy carries a candle. A deacon holds a cross. A monk reads from a book. And a bishop stands with his crook. One mourner—his face obscured by a hood— wipes away a tear with his cloak. Another brings his hand to his face, holding back his grief. And a third turns to speak to his neighbor. Some mourners carry a prayer book or a rosary, and others can be identified by the brooch or cincture (belt) that holds their garment in place. The procession includes members of the clergy as well as laymen, as can be determined from details of the caps, hoods, and haircuts that are represented.

For more information, please go to the Metropolitan Museum of Art website.