Replica of ninth-century ship sails across the Indian Ocean 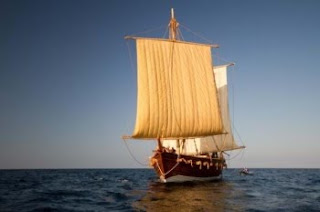 The voyage of the Jewel of Muscat is now underway, with a replica of a 9th century ship sailing across the Indian Ocean from Oman to Singapore. The project is an historical and cultural initiative launched by the governments of those two countries to explore medieval maritime history.

The Jewel of Muscat is a reconstruction of a 9th-century Arab dhow from Oman. The 18-meter boat was built over the last twelve months using construction techniques from the medieval period, including having a hull sewn together with coconut fibre. Built without nails to seal the hull, each timber has had to fit perfectly. The wood is protected by a layer of goat fat mixed with lime, and the sails are square and made from palm leaves.

The ship's design is based on the archaeological findings of the Belitung Wreck, which was discovered in 1998 in Indonesia.

The ship set sail from Oman on February 16th with a crew of 18. Just before departing, its captain, Saleh Al Jabri, said, “It's been incredible seeing this ship go into the water after a long wait. My heart stopped for a few seconds as she went in and I'm so happy and proud that she's now afloat. She is as beautiful in the water as on dry land and I cannot wait to now sail her to Singapore.”

They are using 9th-century navigation techniques, plotting the course with a “kamal” (a small block of wood connected to a piece of string that can calculate latitude), and the stars and the sun. Observation of the sky and sea colour, marine and bird life, and wind direction will also be used as aids to navigation. Modern instruments will only be used to check the navigation techniques.

The ship's travels are being followed online through the project's website - www.jewelofmuscat.tv - along with their Twitter page, which are providing interesting details about the voyage. Last week, the crew came across the Monsoon storms, which included "heavy swells and robust winds" but also helped the ship cover over 90 nautical miles (approximately 165 km) during a 24-hour period.

The Jewel of Muscat has now traveled close to 1500 km, and is expected to arrive at its first port of call, the Indian city of Cochin, within a week. The entire voyage to Singapore will probably be completed sometime in July.

In his log on the ship's website Captain Jabri wrote: "The crew of the Jewel of Muscat is healthy and is working well together. Everyone has their special role to play and they are functioning as a good team.

"The demands of life on board a small ship are great - conditions are very cramped, water is limited, and the weather is turning quite hot, especially below decks.

"But I am proud that everyone is getting along well and helping each other as much as possible. Ahmed, our cook, is doing an excellent job keeping all of us well-fed. But sadly, we are still waiting to catch some fresh fish."