Medieval and Renaissance Manuscripts go up for auction at Christie's 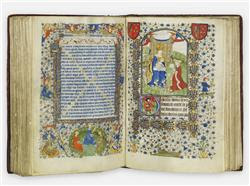 Over £11 million of illuminated manuscripts will be sold at auction in July, including many medieval and Renaissance masterpieces. Christie's has announced that they will be holding a sale of the Arcana Collection: Exceptional Illuminated Manuscripts and Incunabula, on 7 July 2010 in London.

This private collection which has been assembled over the past three decades and which includes personal prayer books made for royalty, bishops, aristocracts and other important patrons from the 13th century to the 16th century. These include King François I of France, King Henry IV of France and Elizabeth de Bohun, great grandmother of King Henry V of England. Christie's expects that the 48 lots will fetch between £11 million and £16 million.

Margaret Ford, Head of Books and Manuscripts at Christie’s, said, “This is a truly exceptional collection which presents illuminated manuscripts and incunabula in all their glory. They are masterpieces of medieval and renaissance art, many commissioned by important patrons.

"Books of Hours are among the most personal artworks. Used for private devotion, they were also intended to reflect the wealth and status of the owner and leading artists and craftsmen were engaged in their creation. The Arcana collection offers the best examples of their type, ranging from Books of Hours to works of literature and on the natural world. The beauty of the page is often complemented by the importance of the text, exceptional, original condition, and interesting, even highly distinguished, subsequent ownership.

"It has been the aesthetic aspect of these masterpieces which has appealed in particular to this private collector and excited his curiosity to acquire and learn more about them. A successful businessman, he has also generously supported public institutions with holdings in this field.”

Highlights of the collection include:

- A Book of Hours opulently illuminated for King François I of France by the Master of François de Rohan is expected to realise £300,000 to £500,000. François I, celebrated as one of the greatest princely patrons of the Renaissance, commissioned art and architecture of the highest quality attracting to his court the leading artists of his day. Leonardo da Vinci was eminent among them and spent his final years in the king's employ. After Leonardo's death François I acquired what is probably the world's most famous painting, The Mona Lisa, from the artist's estate.

- Executed in England in the 14th century, the Hours and Psalter of Elizabeth de Bohun, Countess of Northampton and great-grandmother of King Henry V of England, are expected to realise £2,000,000 to £3,000,000. These were lent by a previous owner, William Waldorf Astor, to the important loan exhibition in New York 1883 that raised funds for a pedestal for The Statue of Liberty.

- A manuscript Bible produced in Italy in the middle of the 13th century with extensive and exquisite painted illustration. It appears to have been made for the use of a convent of Dominican friars - but the borders include diverting genre scenes and fantastical creations far from the routine religious illustrations that might be expected. The death of Theodoric Borgognoni (c.1296) is recorded in the Calendar and he may have commissioned the work: not only a Dominican friar and Bishop of Cervia he was one of the most significant and innovative surgeons of the medieval period. This Bible carries an estimate of £2,500,000 to £3,500,000.

- The first edition of Boccaccio’s On Famous Women (estimate: £250,000 to £350,000) was printed at Ulm in 1473, and is also a masterpiece of German woodcut illustration. This copy was formerly owned by W.E. Gladstone, Hawarden Castle.