Giotto's beautiful art can once again be seen through ultraviolet light 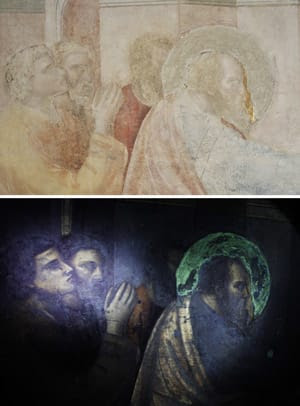 Long-lost colour and detail of Giotto paintings in a Florentine church have become visible to restorers with the aid of ultraviolet light.

The technique is an ultraviolet light created by the Opificio delle Pietre Dure, one of the world's most prestigious art restoration laboratories.

A group of researchers put thois light on a series of frescoes on the walls and ceiling of the Peruzzi Chapel in Florence's Santa Croce Church. Painted by Italy's Giotto di Bondone in the early Renaissance, about 1320, they show scenes in the lives of John the Baptist and John the Evangelist.

Restorers who climbed scaffolding to see the paintings under ultraviolet light discovered details that had been hidden for centuries.

"The scenes are again three-dimensional … we were able to see all the chiaroscuro effects," Cecilia Frosinini, co-ordinator of the project, told reporters.

"There were bodies under the garments … they became three-dimensional, you could see the folds of the garments, the expressions of the faces."

The wrinkles in John the Evangelist's forehead, the threads of his beard and the whites of his eyes are clearly visible under the special lamps used by the research team.

Michelangelo, who saw the paintings more than 140 years after they had been created, admired these Giotto frescoes.

But in the early 1700s, the chapel was whitewashed to make way for a new design. Restorers removed the white paint in 1840, using harsh solvents and steel wool pads that removed much of the original image and left it looking bleached.

Later in the 19th-century other restorers tried to repair the damage by painting in an image close to Giotto's creation. A 1958 restoration removed this layer of paint. All that is left today is a pale image, with much of the detail not visible.

Ultraviolet light could not be shone on year-round for the benefit of the public, as it might damage the frescoes. But the preservation team says it plans to use what it has discovered to restore the images.

Even though they are often referred to as frescoes, the Peruzzi scenes were actually painted "a secco," or on dry plaster, unlike his famous frescos in the Bardi Chapel, which is also in Santa Croce, or his works in St Francis in Assisi.

He painted the Peruzzi Chapel toward the end of his life and some experts believe he was striving for a different effect than he achieved with the fresco technique, in which the painting is done while the plaster is still wet.

"It allowed him to obtain something more rich in terms of colors, of decorations," Frosinini said. "But over time, dry painting is very fragile."