Illuminating the Surprisingly Accessible Market for Medieval Books of Hours 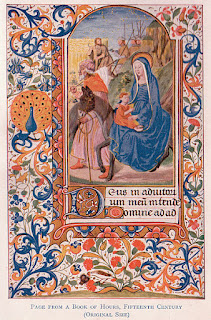 During the Middle Ages, books of hours were more popular than any other text, even the Bible. These intricately illustrated devotional texts began to appear around 1250 and contained a series of psalms meant to be read at eight specific hours of the day, hence their name. Hymns, lessons, and biblical readings were rendered with varying degrees of color and ornamentation. The books were widely owned in Europe until their use was prohibited by the church in the 16th century. Today, says dealer Sam Fogg, of London, books of hours are “almost the only way you can acquire medieval painting that looks like it was when it was new, with the colors still glowing and the gold still shining.”

“People aren’t aware that you can just buy these things,” says Timothy Bolton, deputy director of Western medieval manuscripts at Sotheby’s London. Experts estimate that approximately 100 books of hours change hands every year at auction or through a dozen or so private dealers. “Of all the types of manuscripts extant from the Middle Ages, books of hours are easiest to acquire, because so many remain in private hands,” notes Sandra Hindman, owner of Les Enluminures, a gallery in Chicago, Paris, and, as of this month, New York, that specializes in the books.

Click here to read this article from Blouin Artinfo