The class, composed of students from the classics, literature and history departments as well as the Medieval Institute, joined students from Loyola University Chicago and the University of Wisconsin to tour the world-renowned library and examine the texts. 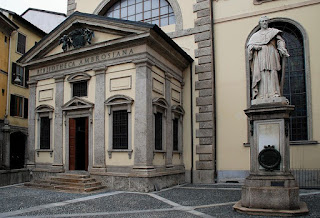 Bloomer said the seminar examines how ancient texts are transmitted.“When we study classical texts in introductory classes, we study them as if they had been printed once by someone in, say, the 4th century,” Bloomer said. “The fact is, however, that we are actually reading copies of copies of copies of the original texts.”

By focusing on the editorial process, Bloomer said scholars can gain insight into interpreting the manuscripts. “Any editor of these texts is making decisions about what to include, which is shown in the text’s physical properties, like commentary notes in the margin,” he said. “In my seminar, we were looking at all these processes by which a text is reprocessed and interpreted.”

Click here to read this article from The Observer