Civil partnership, medieval style: In the days when same-sex marriage was a Christian rite 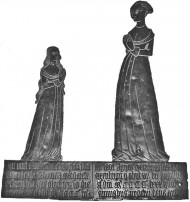 Same-sex unions in Christian churches were held as long ago as the Middle Ages, research shows.

Historians say the ceremonies included many of the acts involved in heterosexual marriages, with the whole community gathering in a church, the blessing of the couple before an altar and an exchange of holy vows. A priest officiated in the taking of the Eucharist and there was a wedding feast for guests afterwards.


All of these elements are depicted in contemporary illustrations of the holy union of the Byzantine Warrior-Emperor, Basil the First (867-886 AD) and his companion John, an article published on the I Heart Chaos blog this week says.

And Prof John Boswell, the late chairman of Yale University’s history department, found there were ceremonies called the Office of Same-Sex Union and the Order for Uniting Two Men in the 10th to 12th centuries.

The medievalist published Christianity, Social Tolerance, and Homosexuality: Gay People in Western Europe from the Beginning of the Christian Era to the Fourteenth Century in 1980.

Click here to see Same-Sex Relations in the Middle Ages from Medievalists.net