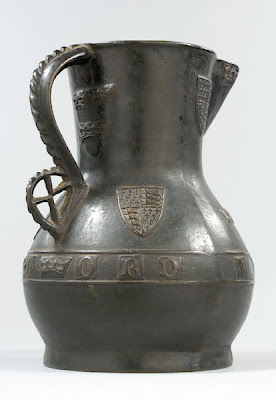 A "nationally significant" bronze medieval jug has been stolen from a Bedfordshire museum.

The Wenlok Jug was taken from the Stockwood Discovery Centre in Luton at about 23:00 BST on Saturday.

In 2005 it was nearly sold abroad, but a temporary export ban provided the opportunity for Luton Museum to raise the £750,000 needed to buy it.

She said: "We are extremely proud that the Wenlok Jug is part of the collections at Stockwood Discovery Centre and are working extremely closely with police and investigators to do all we can to recover it.

"The Wenlok Jug is a nationally significant medieval object."

The jug is a very rare example of metalwork that can be associated with royalty from the 1400s.

The jug was on display in a high security display cabinet when it was taken on Saturday between 11pm and 11.25pm.


‘The Wenlok Jug’ bronze jug is a rare example of metalwork that can be associated with royalty from the 1400s. It stands at 31.5cm in height, weighing 6.1kgs and it's decorated with coats of arms, inscribed with the words “My Lord Wenlok”.

Karen Perkins, Director of Museums, said: "This is an extremely serious and upsetting situation.

"The Wenlok Jug is a nationally significant medieval object, which came close to being lost to the UK when it went up for sale with Sotheby’s in May 2005."