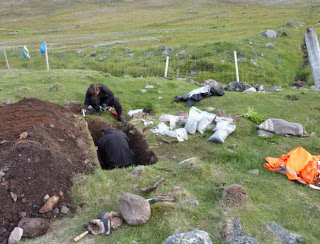 A sensational find at the bottom of an ancient rubbish heap in Greenland suggests that Vikings grew barley on the island 1,000 years ago.


The Vikings are both famous and notorious for their like of beer and mead, and archaeologists have discussed for years whether Eric the Red (ca. 950-1010) and his followers had to make do without the golden drink when they settled in Greenland around the year 1,000.

The Greenland climate was mild when they landed, but was it warm enough for growing corn?

Researchers from the National Museum in Copenhagen say the answer to the question is ‘yes’. In a unique find, they uncovered very small pieces of charred grains of barley in a Viking rubbish heap on Greenland.

The find is final proof that the first Vikings to live in Greenland did grow barley – the most important ingredient in brewing beer, making a form of porridge or baking bread, traditionally seen as staple foods in the Vikings’ nutritional diet.

“Archaeologists have always believed that the Vikings tried to cultivate the soil on their farms in fertile southern Greenland,” says Peter Steen Henriksen, who holds an MSc in agriculture. “But this hasn’t been proved until now.”

Click here to see our feature on Vikings in Greenland