Medicine in the Byzantine Empire 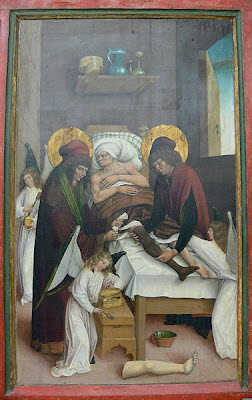 Unlike the west, Byzantium inherited a multitude of medical schools from its ancient past. It was able to draw on these, in particular the prognostications of Hippocrates and the analytical and philosophical skills of Galen and to develop a highly sophisticated medical system, capable of identifying and dealing with many diseases that were only rediscovered in the later part of the millennium.

The basis of Byzantine medical theory was two-pronged. The first took inspiration from the neo-Platonist philosophers of the Hellenistic era and the writings of Saint Athanasius, celebrating the immortality and purity of the soul while understanding that the nature of the body is weak and corruptible.

Thus much emphasis was placed upon spiritual as well as physical healing, the maxim healthy mind in a healthy body being much valued. The theological basis behind physical healing, was that man had been created in God's image. The human body belonged to God and had to be properly looked after. Byzantine theory also provided an explanation for the origin of sickness. Adam and Eve's disobedience in Eden had brought disease and death into the world.

Byzantium also had an ultimate role model, of greater standing than Asclepius or Hippocrates of the Ancients. Christ, the Son of God healed the sick and exhorted his apostles and disciples to give proofs of His own divine powers by acts of healing. Some thirty five miracles are recorded in the Bible and the apostles exercises healing as a 'gift of the holy spirit.' As a result, a plethora of icons and miraculous relics proliferated throughout the Empire.