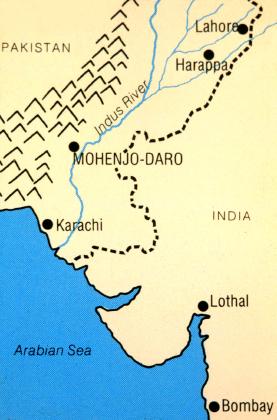 The Vedas, a collection of texts composed over 3,000 years ago in India, speak of a mythical sacred river called the Sarasvati from which the Hindu goddess of science and learning emerged. Hers was a river “surpassing in majesty and might all other waters.” But around 4,000 years ago, all was lost when climate change kicked in.

That is the conclusion of a group of geologists, geomorphologists, archaeologists and mathematicians who joined forces to answer a question that has dogged scholars for centuries: what became of the Indus civilization?

This colossal civilization rose about 4,500 years ago, flourished for 600 years and then began a steady and relentless decline. Previous scholars hypothesized that regional strife or a foreign invasion led to its unraveling, while others suggested that environmental factors may have been to blame. The researchers who took part in the new study, published in the Proceedings of the National Academy of Sciences, had a hunch that the latter theory was correct.

“What we thought was missing was how to link climate to people,” said Liviu Giosan, a geologist at the Woods Hole Oceanographic Institution in Massachusetts and the lead author of the study. “The answer came when we looked at the wide-scale morphology.”