Two Roman-era shipwrecks have been found in deep water off a western Greek island, challenging the conventional theory that ancient shipmasters stuck to coastal routes rather than risking the open sea, an official said Tuesday.

Greece's culture ministry said the two third-century wrecks were discovered earlier this month during a survey of an area where a Greek-Italian gas pipeline is to be sunk. They lay between 1.2 and 1.4 kilometers (0.7-0.9 miles) deep in the sea between Corfu and Italy. That would place them among the deepest known ancient wrecks in the Mediterranean, apart from remains found in 1999 of an older vessel some 3 kilometers (1.8 miles) deep off Cyprus. 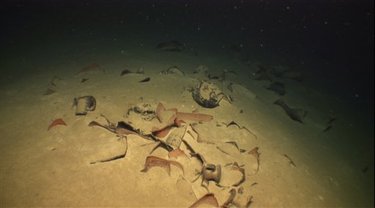 "There are many Roman shipwrecks, but these are in deep waters. They were not sailing close to the coast," Simossi said.


"The conventional theory was that, as these were small vessels up to 25 meters (80 feet) long, they did not have the capacity to navigate far from the coast, so that if there was a wreck they would be close enough to the coast to save the crew," she said.