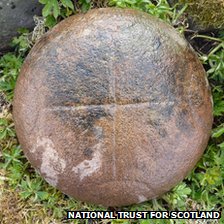 An ancient stone thought to have been used for Christian prayers or curses has been uncovered on a Scottish island. A farm manager chanced upon Scotland's first known example of a bullaun stone on the Isle of Canna, in the Inner Hebrides.

Dating from around 800AD, the stones are associated with early Christian crosses like the one on Canna, and there are several well-known examples in Ireland. The stone is approximately 25cm in diameter, engraved with an early Christian cross and fits exactly into a worn hole in a large rectangular stone at base of the Canna cross.

National Trust for Scotland head of archaeology Derek Alexander said: "This is an amazing find. Bullaun stones tend to be found close to early Christian crosses in Ireland, but this is the first find in Scotland."

He added: "Canna has a long and fascinating history, and this find just tells us even more about the treasure trove that we have in the Trust's care. However, it is also a hugely important find for Scotland, adding more to our knowledge of this distant period in our nation's past. It will be interesting to see if more bullaun stones emerge around Scotland."

Click here to read this article from the UK Press Association