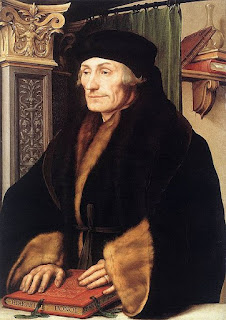 More than 400 years before modern-day governments tried shutting down blogs or blocking tweets, two people tasked with censoring a sometimes-critic of the Catholic Church in Renaissance Europe took to their duties in very different ways: one with great beauty, the other with glue and, it appears, a message.

Born in Rotterdam around 1466, Erasmus was a prolific writer who sought out wisdom in ancient Greek and Latin texts. His writings, mass produced thanks to the printing press, were at times critical of the Catholic Church.

By the time he died in 1536 the church was breaking apart, with splinter groups known as Protestants coming into conflict with the Catholics. English king Henry VIII was one of the most famous examples of a Protestant, creating a Church of England separate from church authorities in Rome.