Towton was our worst ever battle, so why have we forgotten this bloodbath in the snow?

Today, March 29th, should be a significant and melancholy date in the English calendar, known and marked by all schoolchildren. For on Palm Sunday, March 29th 1461, as church bells rang out across the land, two vast armies met on a bleak, snow-swept Yorkshire plateau near the village of Towton to fight what was to be our country's biggest, bloodiest and longest battle. 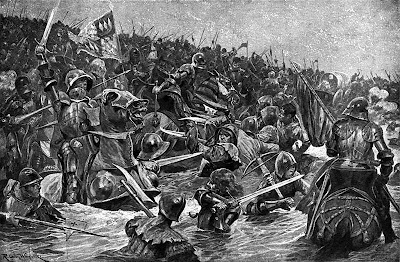 When it comes to superlatives, Towton has them all. Even England's other epochal, history-changing clashes, Hastings in 1066 and the Somme in 1916, for example, cannot challenge Towton for the butcher's bill of the slain. Hastings was a battle that changed the ethnic, political, and linguistic culture of the land forever, and lasted across an autumn day until dark. Yet neither the numbers that fought there (7/8,000 on each side) nor the casualties inflicted, approach anywhere near the later medieval battle. The first day on the Somme, July 1st 1916, when almost 20,000 died, is generally seen as Britain's greatest military disaster, cutting the flower of the nation down like summer corn. Yet Towton trumped even that bloody day in carnage and sheer savagery. As the Civil War battle of Antietam, America's bloodiest single day, is to the US, so Towton is to England. Why, then, is it not better remembered?