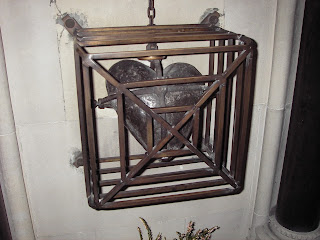 Here is a series of articles about the theft of the relic of St. Laurence O’Toole this weekend from a church in Dublin, Ireland.


Officials at Christ Church Cathedral in Dublin said Sunday they’re distraught and perplexed over the theft of the church’s most precious relic: the preserved heart of St. Laurence O’Toole, patron saint of Dublin.

St. Laurence’s heart had been displayed in the cathedral since the 13th century. It was stored in a heart-shaped wooden box and secured in a small, square iron cage on the wall of a chapel dedicated to his memory. On Saturday someone cut through two bars, pried the cage loose, and made off with the relic.

“I am devastated that one of the treasured artifacts of the cathedral is stolen,” said the Most Rev. Dermot Dunne, the cathedral’s dean. “It has no economic value but it is a priceless treasure that links our present foundation with its founding father.”

The 12th century preserved heart of St Laurence O'Toole -- which has been a religious focal point in Christ Church Cathedral, Dublin, for the past eight centuries -- was stolen from a small heart-shaped wooden box which was sealed in an iron-barred case.

The Dean of Christ Church, Reverend Dermot Dunne, said yesterday that he believes the culprit secretly hid in the cathedral before closing time on Friday evening.

It has also emerged the thief lit two candles during the night before making off with the relic the next morning.

"The vergers realised it was gone when they opened the cathedral at 9.30am on Saturday morning," he said.

"It was definitely there the evening before. They also noticed that there were two peace candles lit on the Trinity Altar. It's all very strange.

"Somebody must have hid in the cathedral overnight on Friday and slipped out first thing on Saturday morning. There was no sign of forced entry and all our doors are alarmed."

Click here to read this article from the Irish Independent

Church authorities who are custodians of relics have been called on to increase their security, or temporarily remove the items, in light of recent thefts.

Raghnall Ó Floinn, Head of Collections at the National Museum of Ireland, said these incidents were worrying, and that custodians of relics might have to increase security.

It follows the theft from Christ Church Cathedral in Dublin this weekend of a wooden box in which the heart of St Laurence O'Toole had been placed almost 1,000 years ago.