New section of Great Wall of China discovered in Mongolia

A structure in the heart of Mongolia’s Gobi Desert – lost for a thousand years and marked on maps as ‘The Wall of Genghis Khan’ – has been revealed as still standing and part of the Great Wall. British researcher William Lindesay, aided by Google Earth, GPS and several other experts, found the new section last Autumn in Ömnögovi Province, a sensitive region 25 miles north of the China-Mongolian border.

The Great Wall of China is in fact many different structures built over hundreds of years along different routes by various dynasties - this find is the first time a section has been discovered outside China. 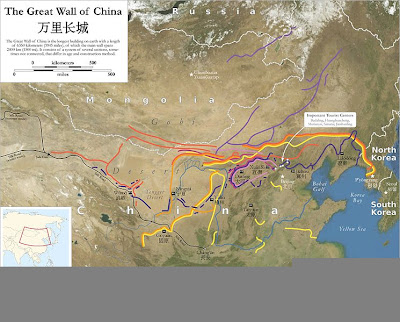 ‘We followed the Wall there for about 100 kilometres (60 miles), parallel to Mongolia’s southern border with China and made some unexpected discoveries in terms of both the Wall’s condition and its probable age,’ said Lindesay, who was joined on the expedition by China-Mongolia border region expert Dr.Tjalling Halbertsma and Mongolian geographer and desert specialist Professor Baasan Tudevin.

‘In one location we found the Wall preserved to a height of around 2.5 metres (eight feet) and made up of earth and branches of a desert shrub called saksaul.’