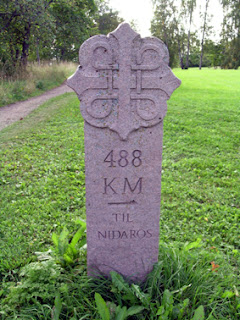 Reaching into its medieval past, Norway has revived an old pilgrim path as a challenging long-distance walking trail with possible spiritual vibes.

Called St. Olav’s Way after the country’s patron saint, it follows the footsteps of pilgrims to Trondheim, called Nidaros in the Middle Ages, and the earthly remains of St. Olav buried under its great cathedral.

In life, the saint was King Olav Haraldsson, credited with sealing Norway’s conversion to Christianity with a martyr’s death in battle in 1030. He was rushed into sainthood a year later. His spreading fame made Nidaros a major destination for European pilgrams, along with Jerusalem, Rome and Santiago de Compostela in Spain. Pilgrims trod St. Olav’s Way until Lutheranism reached Norway in 1537, shutting down saint worship.

Retraced and signposted in the 1990s, it is a Nordic entry in the pilgrim tourism field dominated by Spain’s Santiago way, made famous by many books and a recent movie with Martin Sheen. Norway’s trail is Santiago without the crowds, and with natural beauty replacing the historic villages and churches of Spain.