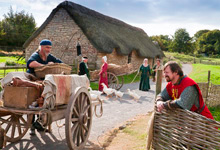 Supporters of a south Wales tourist attraction used as a location for the BBC TV series Merlin have protested against funding cuts there.

Vale of Glamorgan council is making three redundancies at Cosmeston Medieval Village, Penarth in a bid to save £50,000. But it is also introducing free entry to attract more visitors to the site.

Campaigners, who say the changes threaten the village, marched to the council offices in Barry at 17:00 GMT.

The 600-year-old village site was discovered on the Cosmeston Lakes Country Park site in 1978. During the next decade it was reconstructed as a visitor attraction portraying life in a medieval village in the year 1350.