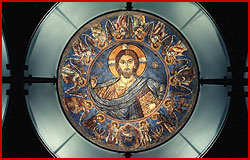 A set of 13th-century Byzantine frescoes — plundered after Turkey invaded Cyprus and on display in Houston for the last 15 years — is headed home at last. It's the closing chapter in what turns out to be a remarkable odyssey.

It all started in the summer of 1974, when the Turkish army invaded Cyprus and nearly 200,000 Greek Cypriots became refugees fleeing south.

"And so all the churches and homes and art was left behind," says Josef Helfenstein, director of the Menil Collection in Houston. "And after years, some of these churches began to be looted."

Hundreds of them, in fact, including a tiny 13th-century limestone chapel outside the small Cypriot town of Lysi. It took several years before somebody noticed the two incredible 800-year-old frescoes inside the Greek Orthodox sanctuary, but eventually somebody figured it out. Thieves took a chainsaw and brutally hacked the frescoes out of the dome and apse — in 38 pieces.