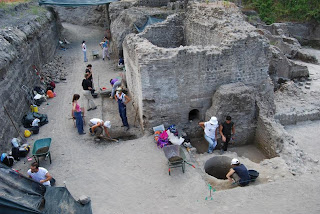 The European Heritage Prize 2011 is awarded an archaeologist and an Italian mayor, who have shown how discoveries from the distant past can help create alternatives to a mafia-run economy.

The European Association of Archaeologists (EAA) has awarded its thirteenth Heritage Prize to Dr. Girolamo Ferdinando de Simone of St Johns College, University of Oxford, and Avvocato Francesco Pinto, Mayor of Pollena Trocchia, in recognition of their combined efforts that have set an important example for the integration of scholarly, and societal achievements with good heritage management under particularly demanding circumstances.

On the Northern slopes of Vesuvius people have not been used to much attention around their history and culture. Tourists have crowded elsewhere at more illustrious locations in the Campania region such as Napoli, Baiae, Pompeii and Herculaneum. The inhabitants themselves used not to think much of their own local past, not known for any of the Roman splendour that has made its neighbours world famous.