Medieval Painting Hints at Ties Between Blacks and Jews


The anonymous 16th-century painter who recorded a scene of everyday life at the king’s fountain (Chafariz d’El Rei) in Lisbon depicted an impressive range of people and animals. In addition to a swan, a seal, fish, horses, dogs and birds, the artist also included more than 150 human figures. There’s so much going on in the busy scene along Lisbon’s port that Joaneath Spicer, the James A. Murnaghan Curator of Renaissance and Baroque Art at the Walters Art Museum in Baltimore, can be forgiven for initially overlooking an important detail. Only after she had finished working on the exhibition catalog did Spicer notice how many Jews appeared in the work. 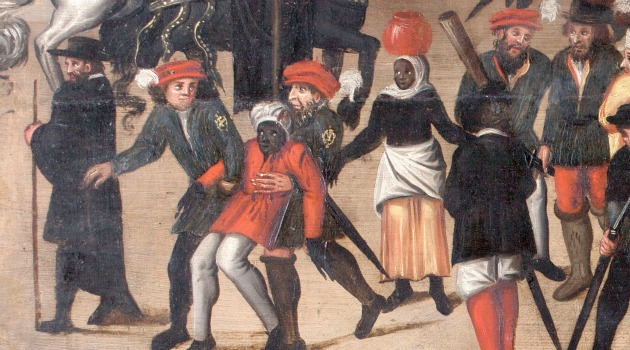 The artist depicted at least half a dozen Jewish men — the women’s religious identities are more difficult to discern — including two Jewish policemen hauling away a black man who appears, according to the wall text, to be “drunk and sheepish.” The latter figure and several other Africans explain the painting’s appearance in the exhibit “Revealing the African Presence in Renaissance Europe,” which is at the Walters through January 21. It subsequently travels to the Princeton University Art Museum, where it will be shown from February 16 to June 9.


“I was really unaware of the presence of so many Jews in this painting until I began to blow up details of a photo in preparation for installing the work,” says Spicer, who recognized the Jewish figures from research she conducted for a 1996 article, “The Star of David and Jewish Culture in Prague around 1600,” which appeared in The Journal of the Walters Art Gallery. “This is the only image I know of — certainly painting from this period that purports to show Jews from life.”